This is a sample entry from Leslie Burton’s newsletter, The Weekly Gold Digger, published on Friday, September 18, 2015.

The US Dollar trended lower in response to the Fed decision to hold off on the interest rate hike.

The Gold market has bounced as a result of the US Fed holding off on an interest rate hike. The global economic outlook has weighed on the US, particularly as the leading trade partner China has slowed. The long-term views of Gold remain quite positive in a global perspective. As the US economic outlook remains fragile, the Gold market may be supported. The World Gold Council reminds us that Gold should not be influenced so much by interest rates as the true role of the metal is as a safe-haven vehicle or a currency in troubled times.

China may have added 16 tons of Gold in August as reported by UBS. China has typically been accumulating the metal while decreased the purchases of US debt instruments. The World Gold Council forecasts that the global central bank reserves added about 120 tons of Gold in the first quarter. In the second quarter, the Gold demand was 137.4 tons. Russia bought about 67 tons in the first half of the year. Their reserves may be about 1.275 tons to date. Gold had been hurt this year by a listless chart. Risk allocations had remained preferred by investors such as the equities. The Fed’s potential rate hike had impacted the Gold negatively. The People’s Bank of China released data showing their Gold reserves to be at 1.658 tons according to the World Gold Council. Russia and China seem to be opting for Gold reserves as opposed to US Dollar reserves. The Shanghai Exchange in China may be allowing physical Gold to be used as collateral on the futures contracts beginning September 29th. The A-shares, treasuries and exchange traded funds may be used as collateral for the Gold futures. The physical Gold may cover up to 80% of the margin value. The Gold may be coming back into vogue as a currency over the longer timeframe. Gold consumption should regain its footing more in the second half of this year. The World Gold Council Indian imports may be about 95 to 100 tons in August alone. The Gold sales decreased to 33,900 ounces in August at the Perth Mint.

The Fed meeting this week unleashed concerns over the vulnerability of the US economy in the face of global uncertainty. The Fed’s decision to hold off on raising interest rates now have influenced the traders negatively toward the US economy. The confidence in the US economy has been decreased perhaps with a sentiment that the Fed may view the underlying weakness and that has perhaps delayed a possible rate hike. The Fed announcement to leave interest rates unchanged at 0.00 to 0.25% regarding it appropriate for the time being. The uncertainties in China bore the weight of the decision, but parts of the economic condition was soft such as net exports and housing. US Fed Chairperson Janet Yellen stressed patience citing the risks inherent with the Chinese slowdown. The transitory inflation effects may also be a factor in the decision. While labor has improved, the inflation target has not been met. The transitory effects of the energy prices also was considered. The announcement did not have the bullish tone as one would expect as traders worried that if the Fed holds off until 2016 before raising rates that the banks may not see profits and the markets may remain weak over the broader markets. The focus was pushed out to the October 27th-28th FMOC meeting stressing that the Fed may make an unscheduled announcement as well. The World Bank and the IMF are two big economic sources that both had urged US Chairperson Yellen to delay any rate hike until 2016. Traders may now believe that the first rate hike may be January of 2016. The Chinese currency devaluation truly weighed in on the markets. The devaluations may not be over. China may continue to devalue the Yuan or other countries may devalue their currencies. China is considering adding an additional 1 trillion yuan into the marketplace over the next three years to stimulate growth. 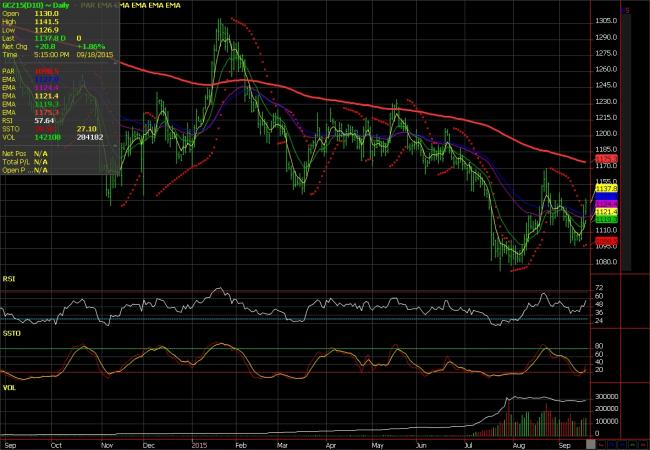 The safe-haven properties of the Gold are perfect for those times of uncertainty and/or conflict in the world! The Gold (December) contract is in a bullish mode if it stays above $1098.50. A key consolidation area may be $1125.00 to $1150.00 for the moment. $1135.00 may be the comfort level. The range may be $1125.00 to $1150.00 for now. The stimulus in other parts of the world such as China and the Euro Zone is good support for Gold. The delay in the Fed’s potential rate hike was supportive to the Gold but this will be a month by month or even a day by day view which the Fed may change at any time. The really long-term range remains very optimistic. The potential of this move if the Fed maintains there delayed stance would be $1175.30.