This is a sample entry from Leslie Burton’s newsletter, The Weekly Gold Digger, published on Friday, September 04, 2015.

The Gold market may be pressured by the strong US Dollar and the upcoming potential rate hike.

The Gold market was looking brighter in the midst of the Chinese devaluation and the Euro Zone potential additional stimulus. China has since conveyed that they want to stabilize the Yuan. The global slowdown and uncertainty are still looming but the last two days was all about the domestic economic condition. China’s markets were closed due to the WWII commemorating events. The Fed has created a fed led stock market bull that they may have to bring back to the normalization period. The stimulus may have helped the labor sector to some degree but today’s numbers just showed that the sustainable recovery may have been slighter than expected. The majority of analysts believe that the September Fed hike may be possible. With that in mind, the Gold could head lower to the previous lows or further. $1109.10 may be a consolidation area. $1173.70 may be then the next point of interest. The stimulus impacted the US economic condition to the point that in the future the US Dollar may be compromised. With that in mind, the Gold may have its day, just not now!

The World Gold Council forecasts that the global central bank reserves added about 120 tons of Gold in the first quarter. In the second quarter, the Gold demand was 137.4 tons. Russia bought about 67 tons in the first half of the year. Their reserves may be about 1.275 tons to date. Gold had been hurt this year by a listless chart. Risk allocations had remained preferred by investors such as the equities. The Fed’s potential rate hike had impacted the Gold negatively. The People’s Bank of China released data showing their Gold reserves to be at 1.658 tons according to the World Gold Council. Russia and China seem to be opting for Gold reserves as opposed to US Dollar reserves.

Nonfarm Payrolls for August were 173,000 while the previous reading was 215,000! It may seem initially unsettling to have employment coming in under the 200,000 mark, but the two previous months were revised up to 44,000 in total and the unemployment rate was down to 5.1% right in the Fed’s target area. Wage growth was up 0.3% from the previous 0.2%. Some analysts think that this figure was subdued due to the lower energy prices and the wages reduced in that sector. Private payrolls were quite weak at 140,000. The government had added 33,000 new jobs. Manufacturing actually lost some 17,000 jobs while the mining industry decreased by 9,000 jobs. The annual retooling by manufacturers including automakers in August could account for the drop in jobs. Professional and business services added 33,000 new jobs and even the part-timers were increased by 11,000 jobs. While this is far from the best labor numbers we have seen, analysts clearly feel that the Fed may continue on schedule with a possible rate hike announcement at the next meeting, September 16th and 17th. While the numbers were not as expected, the Fed may see them strong enough to move toward normalization. IMF Managing Director Christine Laggard and the World Bank has asked US Fed Chairperson Yellen to hold off on a rate hike until 2016. Financial instability and market volatility if anything may delay the Fed rate hike this year. The S&P 500 Market has been a Fed led market since 2008 introducing stimulus three times to fuel the economy, the tightening may tighten the productivity and derail some of the recovery leading to the bull market. Fed Chairperson Janet Yellen has been fixated on normalization and must tighten at some point. They want to be “reasonably confident” before the rate hike. The Fed is staying with their mandate of improved employment and inflation increasing toward the 2% target. The next Fed meeting is September 16th and 17th. Yellen prefers an early and gradual hike rather than a late and steep tightening process. The strong US Dollar has hurt US exports as it is, so now it may just be the key in whether the US Fed may still launch their rate hike in September, December or wait until 2016. 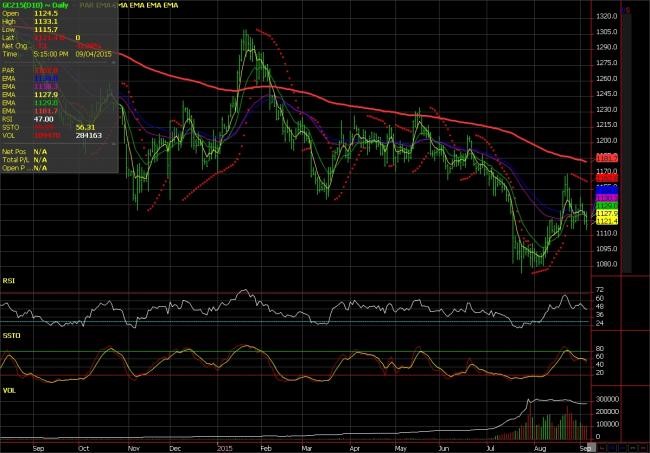 The safe-haven properties of the Gold are perfect for those times of uncertainty and/or conflict in the world! The Gold (December) contract is in a bearish mode if it stays below $1162.80. A key consolidation area may be $1100.00 to $1150.00 for the moment. $1122.00 may be the comfort level. The range may be $1100.00 to $1150.00 for now. The stimulus in other parts of the world such as China and the Euro Zone is good support for Gold. If the Fed delays the rate hike or even introduces additional stimulus, it would be positive for the Gold market. In the near-term, we look for a lower trade. The really long-term range remains very optimistic.