Trend trading is a popular method of trading but it is critical that you develop and use a framework to execute the trade.  The goal is to place yourself in a position to capitalize from a forming trend and get on the right side of the trade early.  I utilize this type of trading as an intuitive, rules-based discretionary trade.  This means that I attempt to understand the dynamics and psychology in the marketplace and use specific rules to manage my risk.

We will discuss a 1-2-3 set-up that gives you a framework for determining potential trends.  While this is a retrospective exercise, I believe it highlights the usability of this framework that you can take advantage of in other markets.  Without understanding the framework and without an example, it is difficult to learn how to search for these types of opportunities.

Let’s examine the core of a 1-2-3 trend trade:  fundamental analysis, technical perspective, and how news affects the market.

Simply put, we are searching for a dislocation in supply and demand. In order for a new trend to begin, a major underlying change in demand, supply, or both must occur (rare case to have both altered at the same time).  To illustrate, imagine a ball rolling down a hill in one direction. Now imagine that ball hitting a rock that alters it direction by 20 degrees. At the bottom of the hill, that ball will be in a significantly different place had the ball not hit the rock (the dislocation). Dislocations form because perception of the underlying marketplace changes:

These dislocations typically happen very quickly and can be unexpected.  The “unexpectedness” occurs because someone is trading on information you don’t have.  This creates an asymmetry of information.  Those in the “know” are early adopters while those out of the “know” either:

In order to successfully identify dislocations, you need to fundamentally understand how that market operates.  For example, if the market is an agricultural commodity, you need to be aware of the demand and supply dynamics.  Is the crop just being planted? Is it in harvest? How is the weather affecting it? What factors will affect demand? Supply? At the end of the day, you cannot be reactive to potential unknowns (in my view, unknowns equate to risk).  You should be proactively thinking about how a market can become dislocated.

Does the current technical perspective support my hypothesis that we are at the beginning of a new trend? Different traders use different analysis to give them different levels of comfort.  Personally, I like to layer different types of analysis to give me the confidence to trade an idea.  There are several that I find useful:

In my opinion, technical analysis is much more of an art than a science.  There are times when it seems to work well and other times when it does not.  Remember, technical indicators and formations are digesting price information that has already happened.  It is very important to remember this but at the same time, since so many traders use them, it is important not to disregard them.  Technical indicators/formations can help us understand what has happened and potentially, what may occur- at the l very least, it helps give some context as to how the market has recently traded.

How does news reflect the market’s sentiment? Said another way, how does the market perceive the news? If you believe we are in a breakout trade to the upside, good news should push markets higher.  Likewise, neutral/poor news will be brushed off without much of an effect to the downside- thus, the trend continues.  Likewise, on the downside, poor news should reinforce a lower market and neutral/good news is brushed off.

Now that we have a framework for how this trade works, let’s examine the March 11 Euro market.

Those following the world economy know the problems of Europe.  To begin, there high levels of sovereign debt for countries throughout the continent – from Greece and Spain to Ireland and Portugal.  Many believe there are more ticking time bombs waiting to come out of the shadows to announce their debt problems.  For example, last week there were rumors of France’s debt being downgraded.  In December 2009 through May 2010, the Euro began a slide of roughly 3000 points or 30 cents.  During this fall, the market was very concerned about several European governments remaining solvent, which precipitated the sell-off.  A factor in determining the value of a currency can be traced to its creditworthiness.  Think of it like a credit rating for an individual.  High credit worthiness equates to good credit and low interest rates to borrow at.  Bad credit, or the worry that the borrower can’t pay it back results in borrowing of higher interest rates and a lower credit.  This is similar to an entire country.  Good credit and low debt typically spurs value in the currency.  Poor credit and high debt typically leaves a country with lower value versus other currencies.

While the ECB (European Central Bank) and others helped stem liquidity worries and kept governments solvent, the Euro bounced off the May 2010 lows.  However in reality, they simply “kicked the can down the road”.  Instead of structurally addressing any real issue, they applied temporary fixes to keep governments running.  I used this information to understand that at some point down the road, the market would again worry about these same issues.  As such, it was only a matter of time until a major market dislocation occurred and the market moved into a new direction.

By looking at the daily chart of the March 11 Euro on Thursday, November 4th and Friday, November 5th.  The euro fell over 400 points (or 4 cents) in two sessions, which is a substantial move lower in the currency market.  This tells me that over this timeframe, the markets perception changed.  The 400-point move should have had bells, whistles, and lights flashing at your trading terminal.  A major dislocation has occurred.  New demand for sellers clearly emerged as longs exited and short sellers initiated new positions. 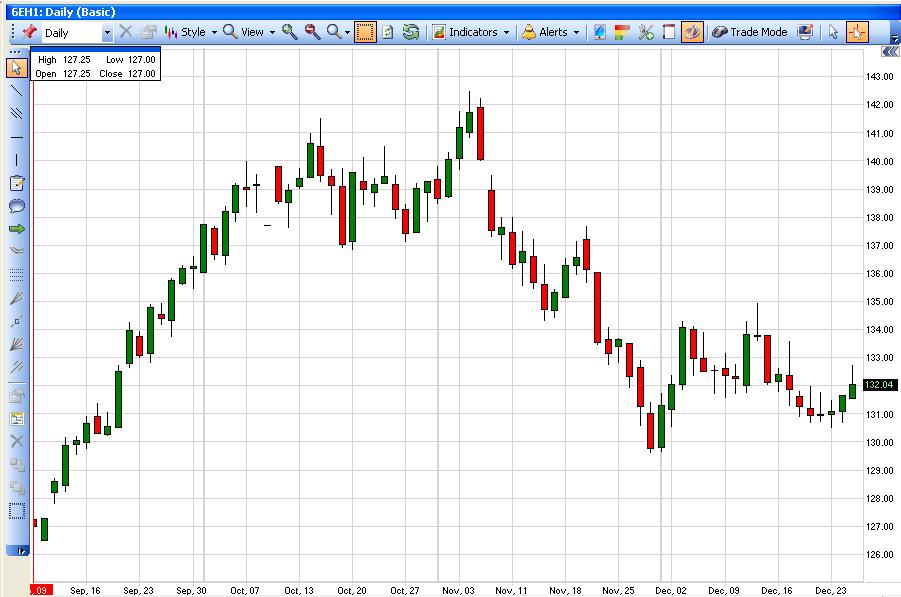 In October 2010, the Euro market seemed to have stabilized after the run up from March 2010.  I viewed this transition as a period of indecision for the Euro currency.

At the same time prices are being hacked lower, news stories begin to turn up the heat for the downside of the Euro.  On Monday, November 8th, the Portuguese and Irish government bond spreads hit their highest bps (basis points) in the Euros lifetime with Irish 10-year bond and the German Bund widened to 557 basis points while the Portuguese 10-year versus the Bund expanded to 450 bps.  The ECB was forced to answer tough questions regarding the record high Irish bond spread, and the ever-widening bond spread of the other highly indebted EU members like Greece, Spain and Portugal.

Throughout this recent downturn, Ireland and Portugal were in the spotlight.  Meanwhile, Greece is pretty much old news, and now it’s Ireland’s and Portugal’s turn taking heat from widespread investor skepticism.

Deficit figures from Euro stat in October only add to the pessimism.  According to Eurostat, Ireland’s budget deficit was the highest among EU members at 14.4% of GDP last year, ahead of Spain at 11.1% and Portugal at 9.3%.  Even in the United Kingdom came in with a deficit of 11.4% of GDP.  Looking forward, Ireland’s deficit is set to rise to 32% this year, a modern European record.  Furthermore, the debt projection is even dimmer for Portugal and other European Union countries.  Remember, the European Union has 27 member states with 16 utilizing the Euro as a single currency, with Germany at one end of the fiscally responsible spectrum and Greece and Ireland at the other end.  As such, each economy had various needs.

Even last week, the Chinese stepped in to buy Portuguese debt only to see the euro head lower in that trading session.  This tells me that the market brushed off neutral/positive news.  Furthermore, on December 23rd, Fitch Ratings agency downgraded the country’s debt one notch from AA- to A+.  All this information is analogous with lower prices as the market becomes more fearful and reinforces our fundamental and technical perspective.

To re-iterate, this has been a retrospective exercise designed to apply certain types of framework.  We reviewed a 1-2-3 set-up covering fundamental analysis, the technical perspective, and how news can reinforce a trend.  It is important to be aware of the fundamental factors in a futures market and how these factors can lead to dislocations.  We reviewed a few key technical themes includes Market Profile, Moving Averages, Volatility, Formation, and Fibonacci Levels.  Each of these requires time to understand what they are designed to do and how comfortable you are using each one.  As you can experience trading, the more useful technical indicators become as you understand how to effectively leverage them and what the shortfalls are.  Lastly, we saw negative news for the euro reinforce a lower trend satisfying the 1-2-3 requirement.  Europe will continue to face debt and funding issues as time moves forward.  By creating a straightforward framework, you can effectively manage your risk and put yourself in situations to capitalize off the changing sentiment of the Euro currency.

Please contact me directly using the Daniels Trading website if you would like to learn more about how to effectively construct a futures and/or futures option trade and learn important risk management techniques.  I also encourage you to register for our special offer for the dt Insider Market Advisory, which provides trade analysis with daily fundamental and technical market overviews.

Insider Market Advisory – Trial - This premier futures trade advisory service is designed to provide you with the timely information your trading depends on. Each day, you'll get a concise snapshot, from both technical and fundamental perspectives, of all eight futures market sectors.