Treasury bond futures had a breakout setup for Friday, which was logical given the May employment report was released this morning. This setup, combined with the market’s proximity to its contact high, made this a good market to trade this morning.

In last night’s edition of Swing Trader’s Insight I labeled T bonds as a breakout setup. The patterns that told us to anticipate a breakout trade were Thursday’s inside day, range contraction (Thursday range was 74% of Wednesday) and doji bar. These patterns indicated that traders had a lack of conviction to make a directional move yesterday. This is common (and smart trading) as the monthly employment report is probably the biggest data point of the month for the month.

I have always been of the opinion that I almost never take trades into a major report, regardless of the market. A market’s reaction to such a report is often a 50 /50 proposition, and I’d like to take trades in which I have better than coin flip odds of being right. Even if you are right on direction, post report volatility can knock you out of a trade before it ends up going your way.

On the other hand, I like to look for trade opportunities after a report release. The same post report volatility that keeps me out of the market ahead of time can make for good trade opportunities after the release. In the immediate aftermath of a report, many traders make emotional and sometimes illogical trading decisions, and this emotional environment is something that we can take advantage of. 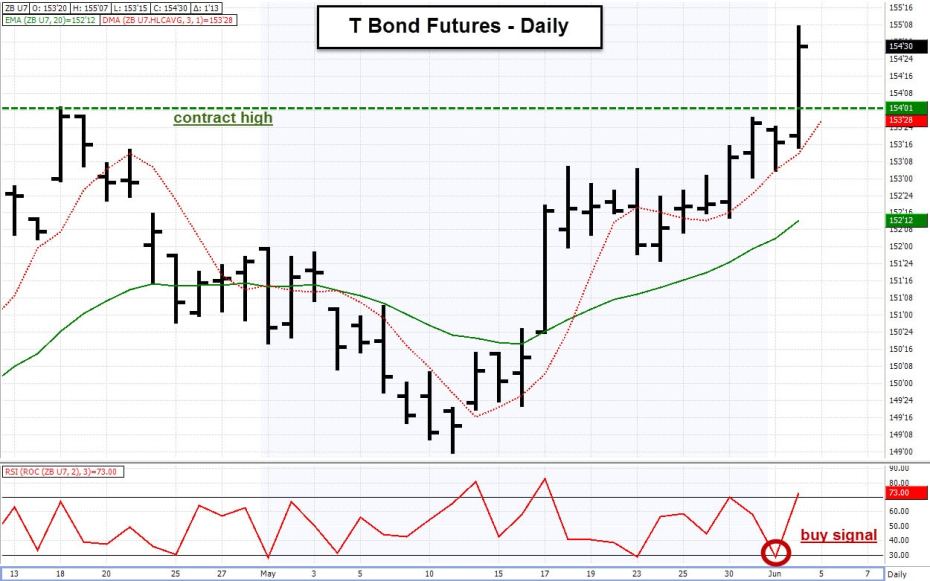 The combination of breakout setup and the employment report made bonds a good candidate for a market to look to trade after 7:30. Although I had a bullish bias for bonds, I would be willing to take a trade in either direction. Sometimes a breakout day ends up turning a market’s trend, or at least a big correction against a recent move.

So for September T Bonds, we could watch the overnight low of 153-15 for the first downside breakout level and 153-28 (Weds. high) and 154-01 (contract high) on the upside. I like to enter these trades using stop orders – buy if the market rallies above our overhead levels or short if it drops below downside prices.

The previous day high is usually the first level to watch for upside breakouts. In this case, however, bonds had already moved above the Thursday high before the payroll report so the contract high was our reference price on the upside (we’re looking to take a trade after the report, not to have a trade on ahead of time).

The May payroll gain came in weaker than the weakest analyst estimate, and bonds immediately rallied after the release. This was a good example of why to enter using stop orders – if you waited and entered an order manually, you would have likely ended up buying much higher than if you had a resting stop order to enter (if you use a platform like dt Pro that has an OSO – Order Sends Order- feature, you can have your stop loss placed automatically as soon as you are stopped into a trade.) 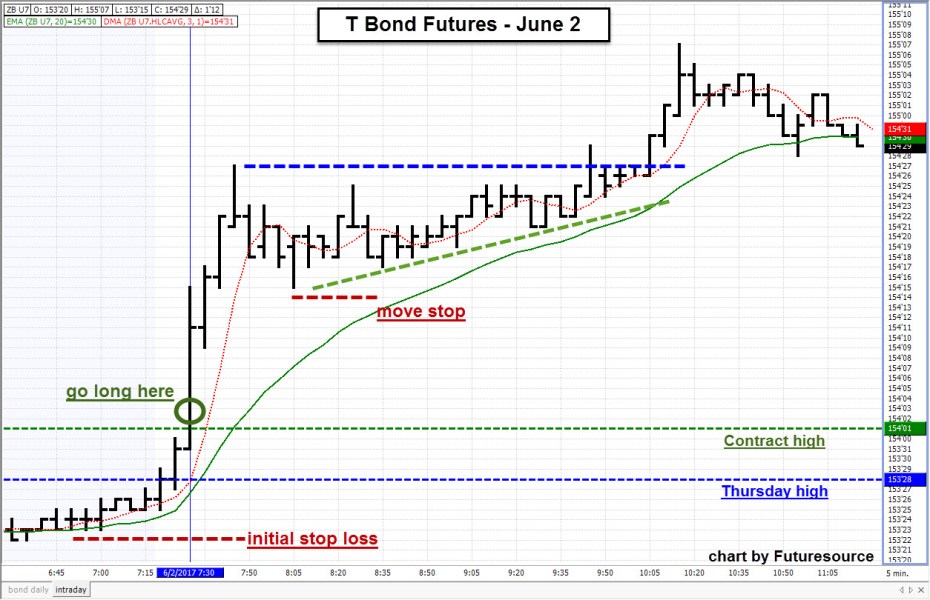 For this trade, our initial stop loss could be placed below the pre report low of 153-22, although you could quickly raise stops to at least break even, as it reached 154-25 within minutes after the report.

The initial session high of 154-27 was reached about 15 minutes later. If you wanted to take profits, you could have done so and wrap up the week before a lot of people were even awake. If you wanted to stay long, the 154-16 low was a good place to trail stops, and the series of higher lows was a bullish pattern. Given today’s breakout setup, you could have added or reestablished long positions when the 154-27 high was taken out, around 9:45 AM. This move ended up taking the market to the session high of 155-07.

Scott graduated from the University of Chicago in 1986 with a degree in Economics. After graduation, Scott worked on the floor of the Chicago Mercantile Exchange then moved upstairs, serving as the personal broker to a former chairman of the Chicago Board of Trade. There, he worked as a broker and margin manager, starting up the firm’s full service brokerage division.

Today, Scott serves as an educator and mentor for new traders, and as a trading partner and ally for experienced traders. The breadth and depth of Scott’s knowledge make him the “go to guy” for both retail and institutional traders.

Scott also publishes two futures advisories, Swing Trader’s Insight and Trade or Fade. He also writes the futures trading blog at www.futuresinsightblog.com. Scott has written articles for a number of futures publications and has done numerous futures trading seminars, including seminars for both the CBOT and CME.

Scott offers his customers the knowledge he has gained from his more than 25 years of experience in the futures business. Scott is accepting new clients at this time.

Scott lives in suburban Chicago with his wife and three children. In his free time he enjoys coaching his children’s sports and various other athletic activities.