This is a sample entry from Kirk Donsbach’s newsletter, The Cattleman’s Advisory, published on March 27, 2017.

China, Brazil’s biggest national consumer of exported meat, has lifted its ban on meat from Brazil. The ban will remain in place on exports from 21 specific processing plants. Chile and South Korea have also lifted or eased their bans.
Supposedly Brazil has been successful in convincing its trade partners that the investigation targeted the conduct of individuals, and not the quality of the meat.

It’s probably a reasonable bet that China has agreed to accept this product at a discounted price. (My opinion, not reported by CNBC or anyone else)

Cash sales for the week were between 130 in the South and 134 in the North. Dressed sales occurred at 212-214$. Basis is between 8 and 12$ over April futures, depending on region. Last week’s slaughter was 613K head, 75K over the same period last year.

The week ending Mar 11th showed steer carcass weights Increasing 5# versus the prior week to 881#. 15 pounds under last year.

Box prices have slipped off of the highs marginally, but still holding quite well. We will see what a 613K weekly kill does to it. The cutout is toppy both fundamentally and seasonally.

April Live is trending higher, but still not willing to close to cash. The board is waiting to fall apart and cash is racing higher. Cash won again this week. The June contract posted a key reversal Thursday, with follow through Friday. The board could react bearishly to the Brazilian event. Open interest is at 5 year highs. If something would change the attitude of all those longs, that would be very concerning.

Feeder Cattle Cattle on Feed came out as expected with most calling it Neutral.
On feed March 1: 100%
Placed: 99%
Marketed: 104%

April Feeders posted a key reversal on Thursday, extending marginally lower on Friday. If the Brazilian news would break the market hard on Monday, it would create a very convincing top look to the market, especially if we happened to gap through the up trend line. IF we shake off the Brazilian news and focus on the 104% marketed at prices pushing 134$ we could see the market cancel the reversal. In that case I would expect a week or two more of strength.
Notice the trend line is nearly vertical. Whenever and wherever this rally comes to an end, it will probably retreat in a fashion similar to the rally.
Seasonal weakness starting anytime between now and first week of April, lasting through the end of April.

Down Side Targets (March feeders)

Most clients moved to May puts Wednesday or Thursday of last week. With May futures above 135, I personally spent 3$ on 132 May puts. Some clients chose to be less aggressive and went with the less expensive 130 puts. The additional cost of the May put is more than covered by the increase in protected cash value. I am comfortable with either choice.

We salvaged a little over a dollar of value out of the Feb Live puts and moved the rest of our clientele to June 104 puts a while back. This week we rolled June 104s up to June 108s, and June 106s up to June 110s. We added 1$ of hedge expense in both instances. Hoping to get a chance to roll them up again. 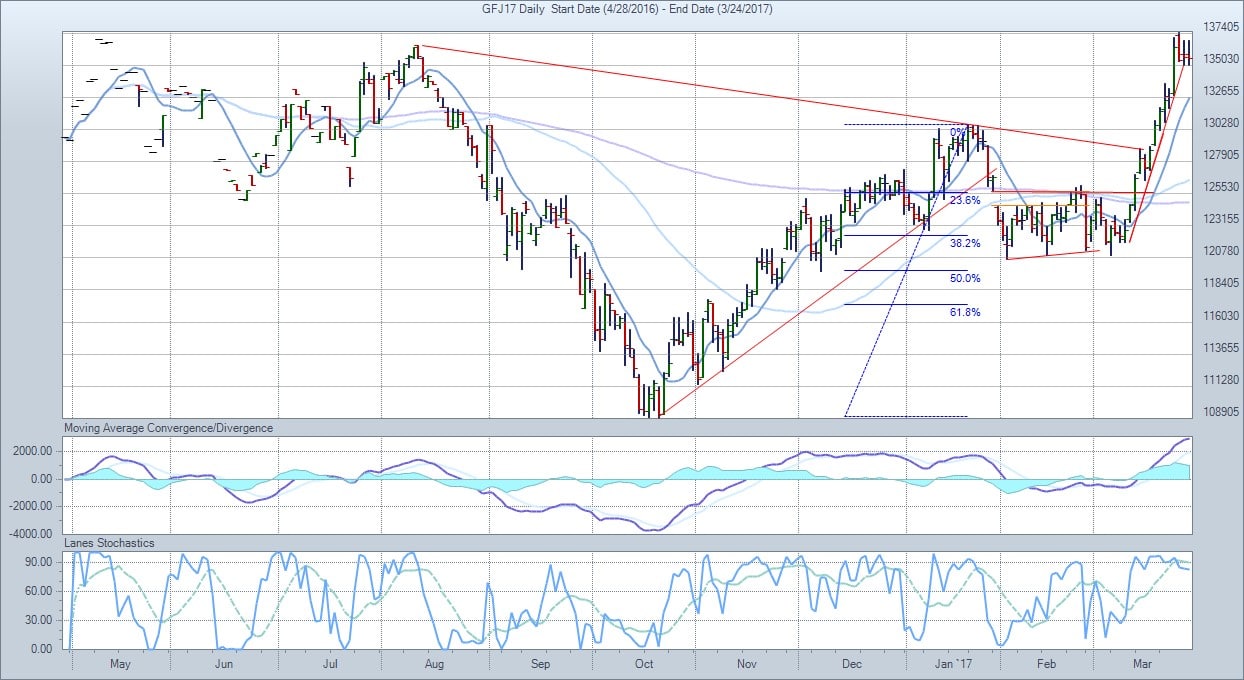 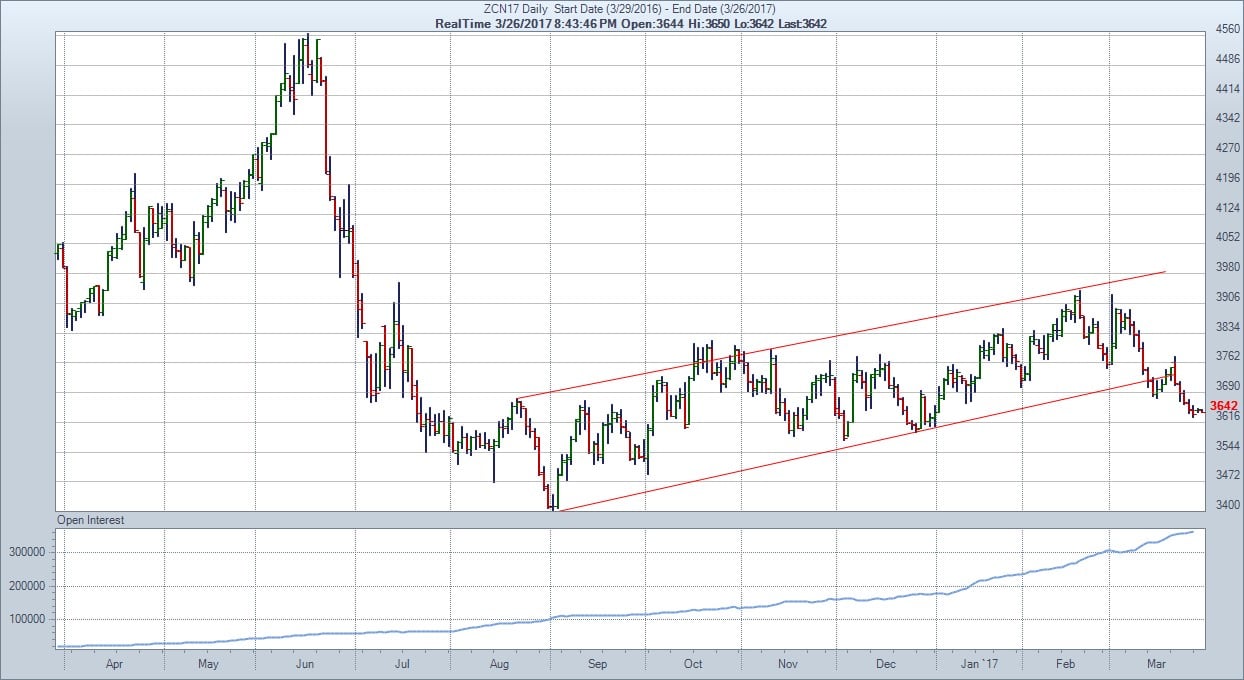 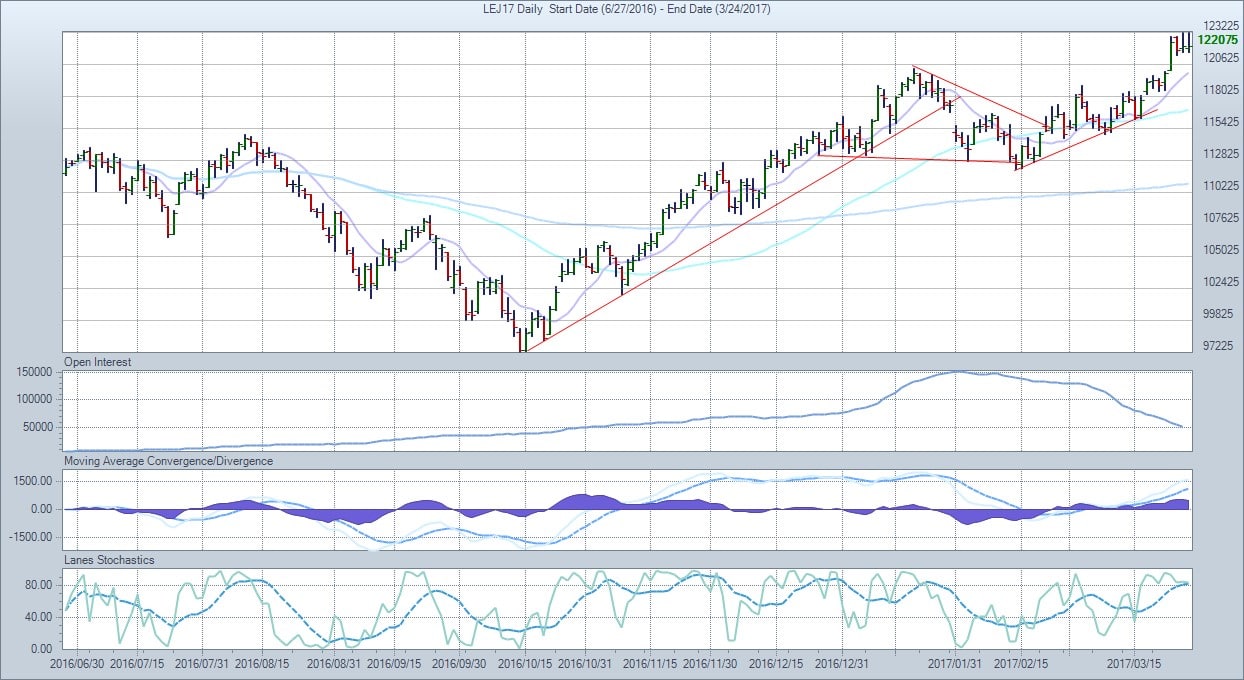 Try The Cattleman’s Advisory – for 60 Days