Home / Futures Blog / A Flight To Gold, A Flight from Risk Asset

The precious metal Gold is a “flight from risk” asset. It is valuable, it is tangible, and it is universally accepted. Capital flows into the physical product, as well as the futures contract, in times of uncertainty. There may not be bigger events that provide uncertainty than a domestic election. An election carries the potential of a shift in power, in policy, and in prosperity. Tuesday, November 8th, 2016 was Election Day in the United States with the highest office, among others, up for election. Most pundits and popular opinion did not expect the eventual outcome. The markets reacted accordingly as it played out through the course of election night.

The Gold futures contract closed at 1,274.5 the day of election night, down 30 points or $3,000 per contract following the preceding week of trading (the Friday close was 1304.50). Leading into election night the market hinted at an expected result with that sell-off. However, as the results trickled in showing a potential opposite outcome, the Gold market reacted accordingly. Here is a ten-minute chart of the December 2016 Gold futures contract. 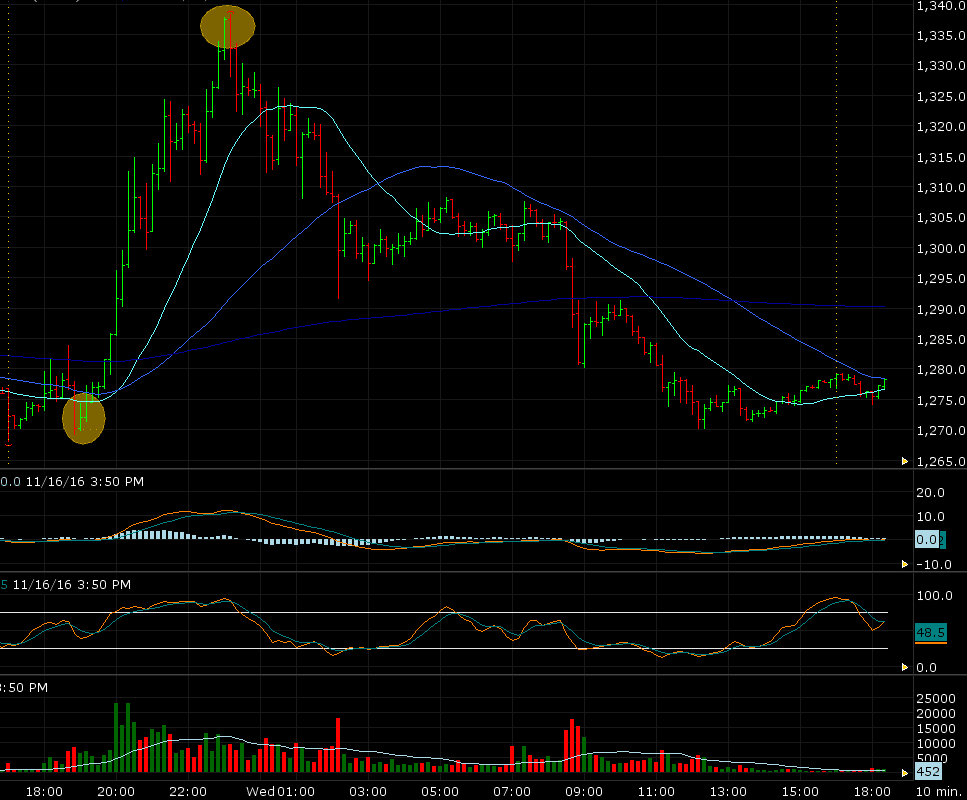 Beginning from 7 PM CT the front month Gold futures contract traded from 1270.2 up to 1337.8 by 11 PM CT. 11 PM CT was roughly about the time the presidential election was called in favor of one candidate. That is a move of 67.6 points or $6,760 per contract – quite the move in such a short amount of time during an overnight trading session. Capital flowed to a tangible, valuable, and universally accepted asset. However, as the uncertainty of an election became clearer, the market “caught its breath” and adjusted. Over roughly the next few hours the futures contract sold-off 38.8 points (1338.3 down to 1299.5) or $3,880 per contract. From there the market traded sideways until the equity markets opened the following day when the contract continued to sell-off to pre-election contract prices.

It may not be as simple of an explanation as that, but how to trade the opportunity of uncertainty and potential volatility was simple. I advised my clients on Monday, November 7th to purchase the December 2016 Gold 1350 call option for 4.00 points or $400 per contract. The 1350 strike price was well within range of the current contract price having traded there just a couple months prior. Additionally, during another recent time of uncertainty and volatility, the Brexit, the December 2016 Gold futures contract traded as high as 1384.4 (7/06/16). Researching option history the 1350 strike price traded as low as 1.20 points or $120 as of late October. With scheduled events such as an election, it is typically in your best interest to anticipate the uncertainty to keep down cost. The day before the election the volatility and skew were higher, meaning Gold call options were potentially overvalued and expensive. However, the current cost of the option was still in line with my personal risk appetite (yours my vary) for such a trading strategy. The position was to be held through the election night and potentially only a day or two to follow, so an option contract close to expiration kept the cost, and therefore the risk, down. December 2016 Gold options were set to expire on November 22, 2016, two weeks after Election Day. As it turned out the position was held no longer than late Tuesday night as I monitored the shift in market sentiment and liquidated the position for 12.50 points or $1,250 per contract. The futures contract price was dropping, the volatility was subsiding, and the goal was accomplished.

Gold is a “flight from risk” asset and it times of uncertainty I fly towards this market pitting limited risk against the potential opportunity.