MARKETS ARE OPEN ON MONDAY!

Price’s were in a “downer” mood on Friday, bears took back much of the weekly gain from early in the week as we approached the close today in corn and soybeans. Much of the newsflow was the same as we saw all week, so I think we are looking at profit taking ahead of USDA rather than a new wave of sellers coming in here.

The weather should all for massive progress in harvest over the next few days. Hurricane Matthew will pull cool but very dry air into the Central US through early next week. We should see a warming effect on Mon/Tues, and the next chance of any harvest delay would happen a couple of weeks down the road.

It appears the dome of high pressure over the Ohio Valley is going to save the SE cotton crop.  The hurricane looks to batter the coast line but make little headway into cotton growing areas on the interior.  Out west, work is getting done every day now as dry and warm has been the theme.  Cotton is getting over its allergy to the 66 handle, closing below 67 on a weekly basis for the first time since late June.  The 2 year EMA sits right at 67.51, we saw our first close below that level since late June as well.  Cotton is on the precipice of falling apart in my opinion. World prices are falling, I expect  #2 cotton board prices to fall with it.  Any hopes for a rally depend on two things, a quick devalue of the USD or an unforeseen weather problem, neither of which are on my radar at this point. 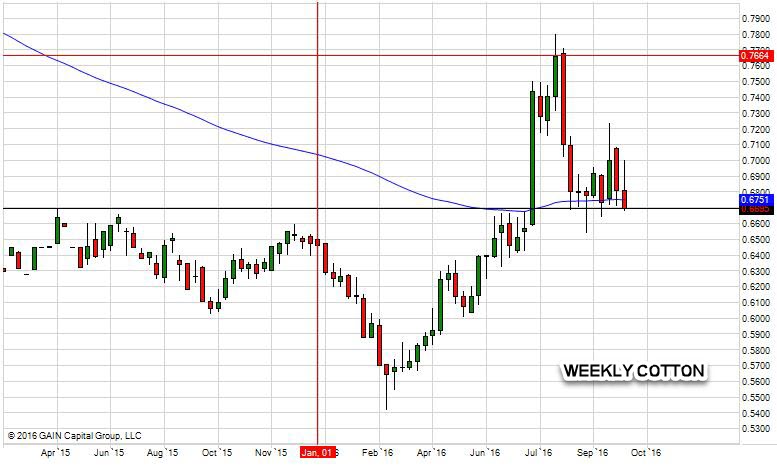 Next week I will get into the WASDE numbers a little deeper.  Yields reports have been fantastic in soybeans and relatively the same in corn. The more northern reports we get, the better I feel about seeing a number come in closer to 173.  It just doesn’t feel like we were multiple % better than 2014. The average guess on corn yield came in near 173.5 bpa, down 1 bushel from September’s yield. Soybean yield is estimated at 51.5 bpa against 50.6 in September. US corn ending stocks are expected to decline 25 Mil Bu; soy end stocks are expected to rise 25-50 Mil.\

Open interest reports are as of the close Tuesday Oct 4

Soybean Net open interest rose to 61,891 net long, up from 56 K last week.  The market remains in the middle of the OI range over the past year (net short 69k in March, long 192 k in May) but below recent highs near 134 k in August. A week ago we saw a surge in speculative short positions, coming in at 34k this week.  The highest number of shorts came in at 127 k in March a 10 year record. In my opinion, soybeans remain susceptible to upside pressure with long position relatively small, but I would favor the short side over the longer term as the lack of shorts will limit short covering, that combined with the amount of production available for sale in the short due to yield increases should keep a lid on rallies.  Im a seller of rallies in Soybeans.

Chicago wheat sat record short as of Tuesday night, with a new 10 year record of 155k recorded.  The recent record was the first week of September, at 137 k.  Last week we were at 134 k. The trend of more longs in the market ended this week, albeit slightly.  The number of shorts in the trade increased to 225 k, 17 k higher than a week ago.  Going back to 2013, we saw the record spec position hold at 170 k.  The lid on that was taken out a few weeks back and the shorts have put the pedal to the metal. There is a bubble that has formed to the downside of the wheat market. Fundamentally, its difficult to find the story to drastically change US carryout. A position of this magnitude short be traded very carefully to the short side, I favor collar positions on selloffs or outright calls. Buying this market has been bad for my health but I remain bullish. 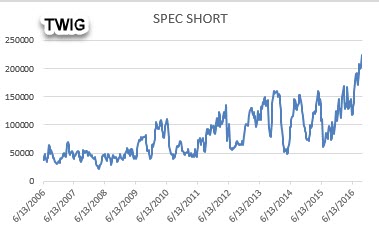 Cotton is the opposite of wheat, kind of.  Cotton has a record long position that has held at recent highs near 80 k  (2013,2010, 2007).  This week we see 78 k longs as of Tuesday. I hate being the only guy doing something but I think we have to stay to the short side.  The chart above has prices at (just below) recent support.  Yet the shorts are still on the sideline. The way I see it in my head is the short position jumping on board when the long side bails out, right when the cotton farmer sells. I’m scratching my head to see the long side so convicted here. If you are on board with this one and you are a true believer that we will see a decent cotton crop, then I would consider adding to positions here. 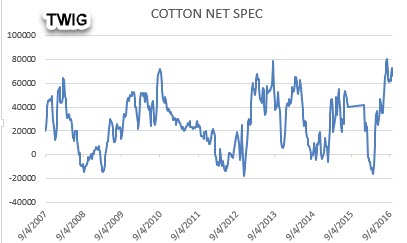 Lastly, corn…. corn is like wheat only before the highs were broken.  The short side sits around 340 k, just below the record near 375 k.  In wheat, I see the short bubble as somewhat justified, stocks to use is near 50%.  But in corn, stocks to use is 20%.  The trade remains way too short.  The problem is the longs have come in over recent weeks and got stepped on today as some of them took profits. The number of longs sat at 183 k on Tuesday, thats 40 k higher than in September but 175 k short of where the longs sat this summer near 342 k.  The net record is 186 k. In my opinion corn has a bubble to the short side as well, but a smaller one than wheat.  I look for wheat to lead the way.  If wheat would short cover, corn will come with it.  I would be buying breaks in corn.  July near 350 is my speed but there are many ways to play it.