This is a sample entry from Kirk Donsbach’s newsletter, The Cattleman’s Advisory, published on Monday July 11, 2016.

Cattle futures continue their two steps forward, one step back as prices come off lows but give back gains on any risk on rally in grain markets. Cash was traded north of 120 again last week which is very supportive going forward. Many guys I follow believe the cutout has bottomed as well. We made a run below 200 last week in the box beef cutout early last week but rebounded into the close of the trade. The dressed cattle trade isn’t going as swimmingly with packers playing hardball, some think they will drop bids this week into the low 190’s vs the 196 paid last week. Cattle is a secondary market in the eyes on the funds right now, COT numbers remain very low historically when looking at who’s involved from the spec side. This reflects the lack of bullish story, but also presents a lot of opportunity for those willing to buy in a scary time. USDA data for cattle comes out next week.

Live Cattle: The 4th of July and beefs best demand seasonally is now complete. All reports indicate retail volume was very good over the holiday. Some of you may have noticed major retailers are back to featuring beef, Outback’s 18 ounce sirloin and Taco Bell’s “steak used to cost an arm and a leg” to name a few. We have killed over 300,000 more cattle YTD than last year at this time. Cash prices appeared to hold at 120$ late Friday, generally considered to be off 1$ from last week. Basis has been between positive 7$ and positive 10$, but that’s relative to the August Live cattle board which was discount to the June board. So why can’t Live cattle rally? Emotion, that goes by the name of fear. Pick any number of internal or external reasons, from seasonals to Brexit. It only matters that they are perceived, probabilities and rational matter not, for now.

August Live Cattle: Contracts established new lows on 6/20, and over a two week period, were able to rally 6.5$. Tuesday saw early selling followed by a close producing a reversal higher for the day. Unfortunately, the rest of the week was spent basically range bound between the Tuesday’s high and low. August live cattle has not produce a clear technical signal. A challenge of the upper trend line around 117 is still technically reasonable, but equally likely and maybe more so given the dominant down trend, is the re-entrenchment of downward pressure. Technically Live Cattle has not produced a strong bottom signal and a failure of Tuesdays lows will leave our rally looking very much like a 3 wave correction higher, followed by more downward selling pressure.
So where does all that leave us? I recommend falling back to what we know. We know a plus $8 basis is historically good and Futures are indecisive at best to shaky at worst. I recommend locking in this basis by forward contracting or selling 2016 production where practical. I would restructure my risk portfolio out of the cash market (actual cattle) and into long Live cattle calls.

Feeder Cattle have a little seasonal upside left to them (First part of August, but in my opinion less reliable after the 4th of July). That’s relative to time, not necessarily to price. As of today, Feeders are moving counter seasonal, at least for now.

I added the July corn chart to today’s newsletter. You will notice the small feeder rally and corns failure seem to be directly connected almost to the day. I don’t know how much more downside corn has, but it is highly likely we are closer to a bottom than a top. If the feeder/corn correlation holds, one can expect our feeder rally to die with a rally in corn. You will also notice a 23% decline in corn produced a 7% increase in feeders. Fear hangs heavy in the feeder markets.

As with live cattle, I do not see the telltale technical signs of a major bottom in feeders. A short term bottom that gets us through the rest of the summer (July and part of August) would not be a surprise. I would aggressively forward contract 2016 production on rallies between now and the 10th of August, and look to re-own with calls. As in Live Cattle, I strongly recommend restructuring risk out of the cash market and into feeder calls.

Moving averages are Negative, threatening to cross over to positive.

Top side of the wedge we broke down and out of presently sits around 144.5 (red diagonal line)

The nearest top side resistance sits at 148.5. I will want to see that penetrated and closed above before I worry about the next higher level.

We recommended purchasing August puts on a downside breakout of a minor wedge (in orange on the chart). Unfortunately, we gapped out of that wedge and our fill was not as good as one would hope. I ended up buying 141 August puts for 5$ on the open Monday (5/23). On 5/31 we rolled 141 puts up to 144 puts, utilizing the aggressive 1:3 ratio mentioned in this letter. Superior Video had Montana’s first big auction sale for fall delivery calves. The cash basis was much weaker than I was expecting or hoping for, coming in at about plus 4$ to $6 on a 625lb calf. I begrudgingly accepted that as an established fact, and forward contracted ¾ of my 2016 production after the video auction. A week later, Northern video saw the basis on a 625 lb fall delivery calf decline to roughly even to plus $2. For clients not forward contracted, I would continue to leverage the protection offered from the 144 puts. We will be working the math on rolling the 144s up or down as we progress forward.

Mr. Payne has mentioned several times that the cattle market is overweight with shorts. He is absolutely correct and at some point that fact will cause a violent correction higher as all the shorts try to exit at the same time. However, timing the exact moment the short trap is triggered can be perilous and very frustrating. Out of respect for that day coming, I re-owned my 2016 sold production with 141 calls. With August futures at 145, even though it is one of my topside targets, the math simply does not make sense and I am forced to risk the calls to at least 148. Clients have been updated on our recommended course of action going forward. 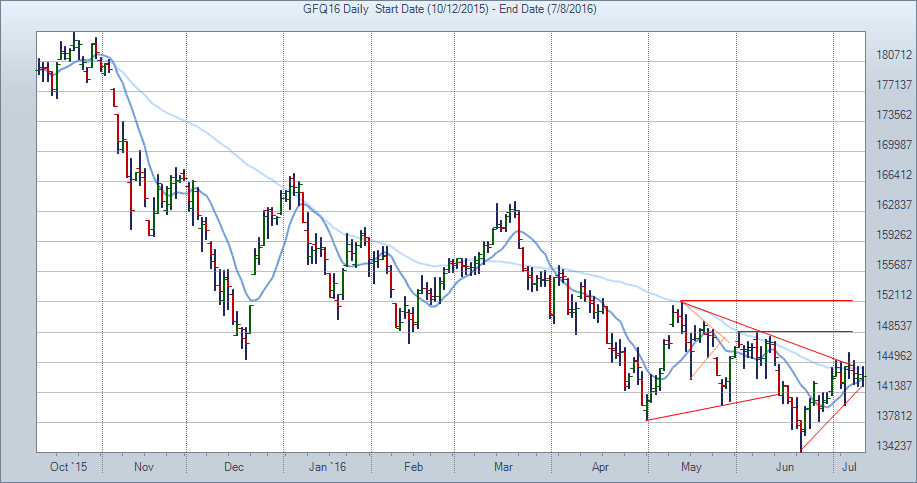 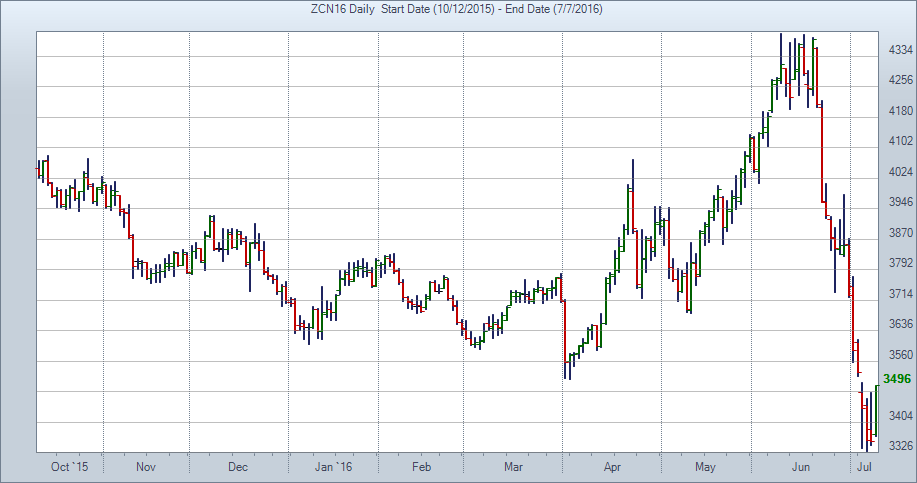 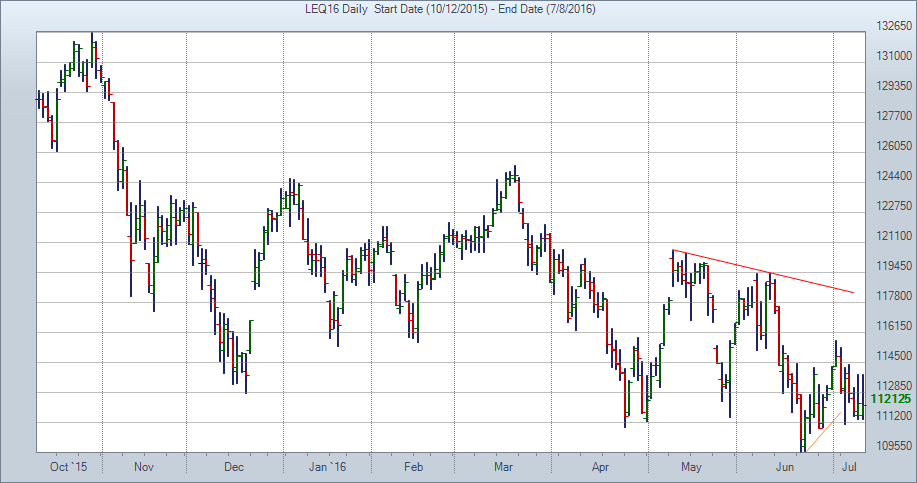