This is a sample entry from Leslie Burton’s newsletter, The Weekly Gold Digger, published on Tuesday, February 02, 2016.

The Gold market has some support from potential global stimulus and lackluster data.

The driver for the Gold market currently seems to be sentiment! The safe-haven aspects of the metal may have been a boost for the Gold, but will it be enough to propel it to further uptrends. Gold has been more range-traded in recent times than ever it seems. Past moves may have been more substantial. The metal really trading data dependent at this point. Friday’s employments numbers could work either way for the metal. It may pop on weaker labor numbers.

Gold is a global market and 90% of the physical demand exists outside the US. It therefore is valued in a variety of currencies and not the US Dollar. The World Gold Council reminds us that Gold should not be influenced so much by interest rates as the true role of the metal is as a safe-haven vehicle or a currency in troubled times.

According to the World Gold Council:

China had set-up the Shanghai Exchange to broaden the ability to buy and sell Gold and India is considering an exchange as well. Since 1975, we have had five bear markets and five bull markets in Gold. The levels currently seen have been close to the median bear cycle.

Data from both the US and China remains weakened by the strong US Dollar. Standard & Poor’s credit rating agency has downgraded thirteen Chinese companies this year. The energy markets have dropped with vast inventories and slight demand. The boon for consumers may have created a worrisome sentiment rather than a boost for households though. Energy companies are interrelated to the household incomes as US energy companies must maintain a $60 per barrel profit margin. OPEC and other oil producing countries have pushed the bullet maintaining production and driving prices down. Manufacturing is down and the US maintains about 80% of its workers in the service industries. China is also becoming a consumption country thus lighter on the manufacturing. The Real GDP for Q4:15 was 0.7% while the previous reading was 2.0%. The GDP Price Index was 0.8% while the previous reading was 1.3%. Consumer spending has lightened as exports again have impacted the GDP by 0.5% points. Services spending increased by 0.9% points. Goods spending increased by 0.5% points. Healthcare increased by 0.3% points.

Russia is attempting to open discussions with OPEC on possible cuts to production of oil to support prices. Saudi Arabia, the largest OPEC producers suggested a 5% cut. Iran was opposed due to the sanctions that cut their production totally. They want to get back to their market share. This is a bit of a game changer for the markets, but Russia insists that all the oil suppliers must agree to the cuts before anything can happen. The energies have pressured the marketplace so the idea of stabilizing prices may truly support the indices. Potential stimulus from the BOJ, ECB or Peoples Bank of China could add support as well. The ECB will review their stimulus policies next month to see what may be done to boost growth. The FOMC came in as expected leaving monetary policy unchanged but really leaving March open! Many analysts believe that the initial four hikes that were previously expected may be off the table and only one hike may be the case. Some analysts feel that the December rate hike was too much and a miss step for the Fed. The Fed may look at the employment area as stronger along with housing and household spending. Exports remain soft and inventory slowed. Inflation continues to be low, under the 2% Fed target. The Fed’s mandate remains to “foster maximum employment and price stability”. They did use the word “accommodative” twice in the announcement thus invoking some dovish sentiment as they attempted to remain data dependent. There are other possible developments that the market may invite. The IMF cut the global growth to 3.4% now. The World Bank has pared down their forecast of global growth to 2.9% from the 3.3% they had in June! The global economy rose to 2.4% last year. China was shaved to 6.7% for 2016 while forecasts in June were 7%. The US growth was also reigned in to 2.7% from forecasts of 2.8% last June. The FOMC forecasts the interest rates in the US to be at 1.375% by December 2016. as of last Friday. 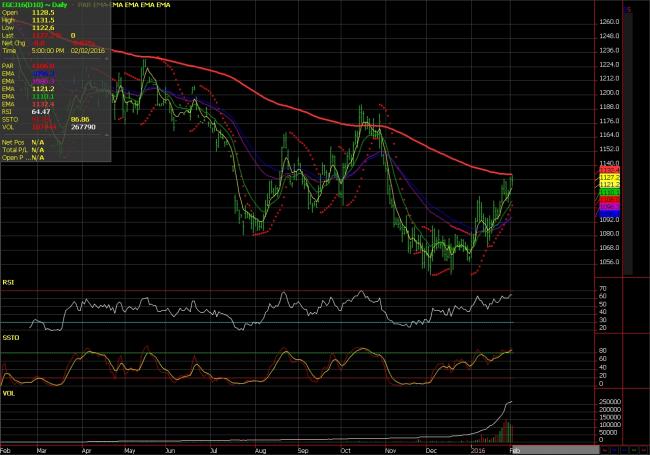 The safe-haven properties of the Gold are perfect for those times of uncertainty and/or conflict in the world or a time of easing! Expectations for a dovish Fed may continue to support the Gold. The Gold (April) contract is in a bullish temporary mode if it stays above $1110.00. $1127.30 may be the comfort level or point of control. The range may be $1150.00 to $1110.00 for now. The stimulus in other parts of the world such as China, Japan and the Euro Zone is good support for Gold. The really long-term range remains very optimistic. Currency devaluations would be the key to a rise in Gold! The uncertainty feeds the Gold as a safe-haven. The idea that the Fed introduced the rate hike prematurely also may support the metals.