This is a sample entry from Leslie Burton’s newsletter, The Weekly Gold Digger, published on Friday, Aug 07, 2015.

Could this be the time to buy Gold? Technically, there is a consolidation and oversold conditions. The Gold (December) may be in a potential bullish pattern.

The Gold market has been totally oversold and was due for a bounce! Inflation is still subdued and the stock market has traded toward the highs with a strong US Dollar to boot. The economic condition is not ripe for Gold at this particular time, but the true nature of Gold as a safe-haven calls for fear and anxiety to increase the demand for Gold. Gold serves as a hedge against inflation. Gold hedges against currency devaluations and conflict. The International Monetary Fund had decreased its forecast on global economic growth down to 3.3% from the earlier 3.5% which also may boost the Gold prognosis. In the near term we have a bounce which is natural for an oversold market. There is still nothing to stimulate buyers yet. Long-term there is a much different scenario where Gold may have its day. Currency devaluation and inflation may be projected further out. The Fed hike may be negative for Gold, but a drop in the stock market would perhaps be enough to create a spike in the Gold.

China has only opened the privatization of Gold to the people in 2002 so the 1,530 tons has been fairly strong. Gold jewelry purchased in China was up around 5,282 tons at about $189 billion. The Peoples Bank of China revealed their holdings of 53.3 million ounces of Gold or 1,658 in June. China has craved to have their currency become a premier currency to compete with the US Dollar. China has pursued the drawing rights from the International Monetary Fund (IMF) for years. Now their renminbi is being considered by the IMF. China may also be extending their mining interest. China’s Commercial Bank and Industrial Bank is attempting to participate in the London Gold price fix. Zijin Mining in China is tendering for mine acquisitions in Australia. The recent lower moves in the Chinese Stock Market may lead to increased allocations in the Gold market as there seems to be an inverse relationship there. Fear and anxiety trigger Gold interest in years past and any selloffs in the stocks may cause a shift in the allocations. Hong Kong exported about 64.2 tons of Gold to mainland China in May which is an increase of 36%. Switzerland exported Gold to China as well increasing the Gold by 24% in May. Switzerland may export a total of 2,000 tons of Gold this year. Chinese demand for Gold still is down 18% from last year still. The Chinese Gold fix may be a boost for the metal that is typically seen as the fear and anxiety safe-haven product, but now may be the buyers choice trade. The Chinese love to buy Gold. China has sought to have their investment counselors suggest Gold to consumers as an investment product for years now. The Shanghai Gold Exchange (SGE) may have lofty plans for the metal which may be the boost that Gold needs to reclaim its former safe-haven value. The SGE may want to establish a yuan-denominated Gold fix price.

Today’s employment report seemed to confirm a potential rate hike for September for many traders and analysts! The Employment Report for July was 215,000 while the previous reading was 223,000. Factories increased labor by 15,000 workers. The Retail Sector increased jobs by 36,000 employees. Health-care related jobs increased by 30,000 in July. There was some wage advancement of about 0.2% to an average $24.99. The average workweek increased about 6 minutes to 34.6 hours. The longer work week could have contributed to the wage growth. We still have about 8.3 million people out of work in America. July produced about 668,000 discouraged applicants that simply took themselves out of the job search. The Participation Rate was 62.6% perhaps due to baby boomers retiring or discouraged job hunters.

The ADP Employment Report of private industrial sectors for July were at 185,000 while the previous reading was 237,000. The ADP Employment Report covers the private industrial sectors and was below expectations. The unemployment rate has stayed at 5.3% thus adding to the positive employment data. The Fed is staying with their mandate of improved employment and inflation increasing toward the 2% target. The next Fed meeting is September 16th and 17th. There is the Fed annual conference in Jackson Hole on August 27th – 29th but US Fed Chairperson Janet Yellen will not be attending. Yellen prefers an early and gradual hike rather than a late and steep tightening process. IMF Managing Director Christine Laggard and the World Bank has asked US Fed Chairperson Yellen to hold off on a rate hike until 2016. She is still using the appropriate policy “accommodation” in her talks and is still referencing that a hike may be data dependent. The Fed noted that over the last year 2.9 million jobs were created to set the US growth on course. Fed Chairperson Yellen feels confident that if tightening in a “prudent and gradual manner” it shall be easier keeping stability in the marketplace.

The Fed maintains that the economic recovery is on track and does not anticipate a strong reaction from the potential rate hike perhaps in September or December. The service sector has been a major boost for the US economy and accounts for about 80% of all the labor. The ISM Non-Manufacturing Index for July was 60.3 while the previous reading was 56.0. It beat expectations by a long-shot as increases in business activity, new orders and employment all came in strong. Any reading over 50 points to expansion. This was the highest reading we have had in about ten years. Retail trade, transportation, construction and warehousing all were supportive while manufacturing remains challenged. The ISM Non-Manufacturing Index covers services, mining, construction, agriculture, fishing, hunting and forestry. The services sectors may balance the weaker manufacturing segment. 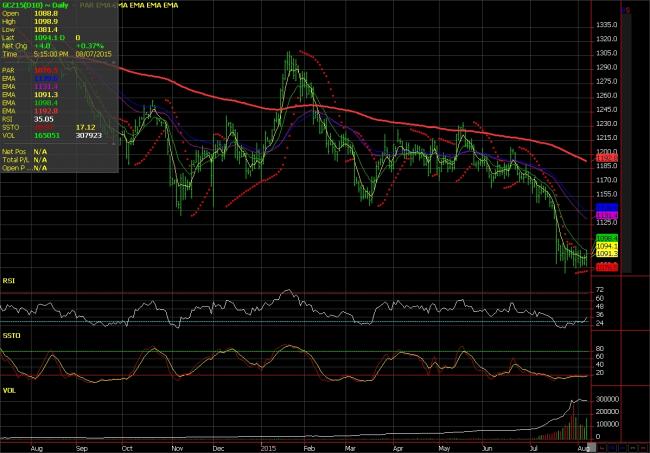 The safe-haven properties of the Gold are perfect for those times of uncertainty and/or conflict in the world! The Gold (December) contract is in a bullish mode if it stays above $1076.50. A key consolidation area may be $1075.00 to $1200.00 for the moment. $1091.80 may be the comfort level. The range may be $1075.00 to $1200.00 for now. The main catalyst that may support the Gold would be unexpected inflation although subdued to date. The stimulus in other parts of the world such as the Euro Zone is good support for Gold. In the near-term, we look for a bounce. The bounce may be short-lived but seasonally this is the time we start to look for the Gold to make a move toward December. The really long-term range remains very optimistic. The bounce could be short-lived as the fundamentals do not add up yet but the chart is extremely enticing.