This is a sample entry from Leslie Burton’s newsletter, The Weekly Gold Digger, published on Friday, May 08, 2015.

The US Dollar has backed off the highs that have pressured the Gold market.

Attempting to foresee the world economic outlook for the future may be difficult, yet we can utilize knowledge of past events and economic conditions to anticipate potential scenarios. The recent vulnerabilities of the currency markets may be a precursor of the future of the Gold market. Historically, we see Gold as a currency, a metal, an industrial product and ornate product never having lost value. Going forward, it seems that in hard economic times that an exchange of Gold may survive valuations of the currencies to maintain value. The long-term outlook for Gold may be incredibly bullish. In the near-term, the pennant formation may not give the Gold a solid direction. It may trade in a range or possibly lower. The holdings of SPDR Gold Trust was steady at 739.06 tons Friday. The American Gold Eagle coins by the US Mint sold about 4,500 oz of coins so far this month while last month they sold 29,500 oz. The central banks may hold about 30,000 tons of Gold. The US Gold held in reserve may be 8,200 tons.

The Shanghai Gold Exchange (SGE) may have lofty plans for the metal which may be the boost that Gold needs to reclaim its former safe-haven value. The SGE may want to establish a yuan-denominated Gold fix price. China has craved to have the yuan become a premier currency to compete with the US Dollar. China has pursued the drawing rights from the International Monetary Fund (IMF) for years. China has sought to have their investment counselors suggest Gold to consumers as an investment product for years now. It is thought that the People’s Bank of China may have expanded their Gold reserves to 3,000 tons perhaps. The China Gold Association reports that the Gold consumption may have increased by 326.68 metric tons in the first quarter. India may have reclaimed their top spot as the largest buyer due to jewelry sales. The International Monetary Fund (IMF) may hold 2,814 tons of Gold. It is suggested often to central banks that 4% to 10% of assets in Gold may be prudent. The Gold imports from Switzerland to China may have been around 46.4 metric tons in March. Switzerland may have imported 97.2 tons from the UK in March. Russia may have added 31.1 tons of Gold in March taking the reserves to 1,237.9 tons.

In 2014, the total demand for Gold amounted to 3,924 tons. Consumption of Gold was also down. India purchased 843 tons and China purchased 814 tons according to the World Gold Council. India had the 80/20 rule stopped in November and the tariffs are being worked on as well. The Bank of Greece sold 5,849 Sovereign coins in January. Globally, the central banks purchased about 477 tons of Gold. Russia purchased about 173 tons of Gold last year. There is now a Memorandum of Understanding between the Shanghai Exchange and the World Gold Council. Their mandate is primarily to facilitate the international Gold trading in China. Projections for growth in demand of the metal are quite lofty. The Shanghai Free Gold Exchange is operational. The Stock Exchange of Thailand is planning to establish a spot Gold exchange but talks with the Gold Traders Association are to continue. Thailand only imported about 159 tons into the country last year. The Kilobar Gold Contract on the Singapore Exchange was introduced. The annual outflows from the Gold backed ETF’s decreased to 159 tons in 2014. Global mined Gold Stocks average about 258 tons per month while the Shanghai exchange alone withdrew about 255 tons of Gold in January.

Friday confirmed Fed Chair Janet Yellen assumption that the weaker data from the first quarter had been transitory! Last month’s Nonfarm Payrolls number at 126,000 new jobs for April had the market worried, but todays 223,000 kept March an anomaly! The March reading of 126,000 actually had been revised further to 85,000. The recent GDP report had sent a message that the US economy has weakened, yet the Fed was quick to label the report as a transitory state due to hindrances to overcome such as the inclement weather conditions, weaker demand for goods, a stronger dollar and a dispute at a busy West Coast port. Crude oil may have been another hindrance as the energy companies have been impeded by soft demand and oversupply of energy products. US Fed Chair Janet Yellen now has to evaluate the economy’s stability and strength at the June 16th – 17th meeting. The Fed hike is now forecast by many analysts to begin to tighten in September or possibly even December. Inflation remains below the targeted 2%, so they must be reasonably confident that the target will be in range.

Greek Prime Minister Alexis Tsipras is still hopeful that the International Monetary Fund, the European Central Bank and the European Commission may come to terms in the negotiations. Greece seemed to have hit a wall lately not wanting to cut pensions or abide by reforms necessary to free funds for the creditors. The Greek leader spoke to Russian President Putin about a gas pipeline project to increase revenue for Greece, but it may not provide enough revenue to cure the debt problem. Greek default does not really seem to be an option for all concerned. No one wants to endanger the future of the Euro FX so a Greek exit is off the table. Euro leaders are looking for the May 11th meeting to structure the reforms and get down to business or they could start to tighten the Greek bank’s emergency liquidity access. The talks have gone on for over 100 days with no real progress in sight. The leaders meeting in Frankfurt did raise the limit on the Emergency Liquidity Assistance (ELA) to 2 billion euros to a total of 78.9 billion euros. The ELA has looser rules regarding the quality of collateral accepted than the ECB may. Standard and Poor’s, Dominion Bond Rating Service and Fitch’s do not believe that the International Monetary Fund (IMF) and the European Central Bank (ECB) are not your standard creditors. Therefore, they do not classify a missed payment as a default. Greece’s securities may be discredited from acting as collateral for lending to banks. The collateral must be discussed with the ECB to determine what may be accepted for the emergency funding. Greece will be using strategic assets to garnish revenue as structured in its reforms. The contagion risks seem to be diminished for the near-term as Greece is not posing a potential exit. Europe has guarded against some of the impact of Greece’s debt problems. CreditSights Inc. reports that the Euro banks have been diminishing their risk exposure with Euro banks decreasing the Greek bond holdings. 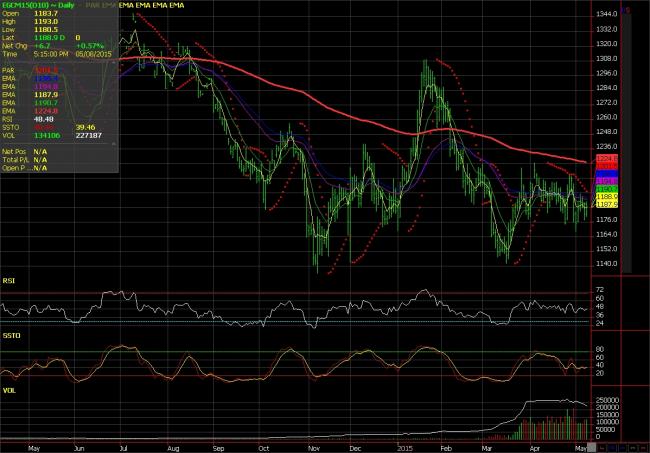 The safe-haven properties of the Gold are perfect for those times of uncertainty and/or conflict in the world! The Gold (June) contract is in a bearish mode if it stays below $1201.50. A key consolidation area may be $1200.00 to $1175.00 for the moment. $1186.20 may be the comfort level. The range may be $1200.00 to $1175.00 for now. The main catalyst that may support the Gold would be Greece exiting the Euro Zone and/or perhaps any upset from the Fed deciding to hold off on the tightening until December. The stimulus in other parts of the world such as the Euro Zone is good support for Gold.

Download your FREE copy of “Gold Exposed” and learn the ins and outs of the gold markets that will help answer many of your trading questions.