This is a sample entry from Leslie Burton’s newsletter, The Weekly Gold Digger, published on Friday, March, 06 2015.

The US Dollar today surged to new highs over the surprisingly positive jobs report.

Today’s jobs report sank the Gold and boosted the US Dollar. The only really catalysts to support the Gold market now may be the possible Greek exit from the Euro Zone and/or the Euro Zone begins their stimulus on Monday. The near-term looks rather glum for the Gold yet in the future there is a great deal to propel it to new highs. The Chinese have been buying Gold and cutting back on US debt instruments. The dollar may just become overvalued to the point where it must turn down, but that is not today!

In 2014, the total demand for Gold amounted to 3,924 tons. Consumption of Gold was also down. India purchased 843 tons and China purchased 814 tons according to the World Gold Council. India had the 80/20 rule stopped in November and the tariffs are being worked on as well. The Bank of Greece sold 5,849 Sovereign coins in January. Globally, the central banks purchased about 477 tons of Gold. Russia purchased about 173 tons of Gold last year. There is now a Memorandum of Understanding between the Shanghai Exchange and the World Gold Council. Their mandate is primarily to facilitate the international Gold trading in China. Projections for growth in demand of the metal are quite lofty. The Shanghai Free Gold Exchange is operational. The Stock Exchange of Thailand is planning to establish a spot Gold exchange but talks with the Gold Traders Association are to continue. Thailand only imported about 159 tons into the country last year. The Kilobar Gold Contract on the Singapore Exchange was introduced. The annual outflows from the Gold backed ETF’s decreased to 159 tons in 2014. Global mined Gold Stocks average about 258 tons per month while the Shanghai exchange alone withdrew about 255 tons of Gold in January.

The Nonfarm Payrolls for February came in at 295,000 while the previous reading was 257,000 new jobs created. We were anticipating about 230,000 new jobs created so the news was interpreted as a Fed rate hike may occur as early as June and the word patient may be scratched from the next Federal Open Market Committee meeting which will be March 17th through 18th. The Unemployment Rate came in at 5.5% while the previous reading was 5.7%. The manufacturing jobs added 8,000 workers. The government payrolls increased by 7,000 employees. The federal government payrolls decreased their staff by 6,000. Food and beverage entities increased by 59,000 workers. Professional and business services increased by 51,000 employees. Technical consulting services increased by 7,000 new staff. Computer systems and design increased by about 5,000 new developers. Architectural and engineering services increased by about 5,000 new workers. The construction sector added 29,000 new jobs. Specialty trade contractors increased by 27,000. Health care added 24,000 workers. Hospitals added 9,000 new workers. Transportation and warehouse positions added 19,000 new jobs. Couriers and messengers added 12,000 new people. Retail services added 32,000 new staff. The Average Hourly Earnings increased only about 3 cents or 0.1% while the previous reading was 0.5%. It is thought that there may be about 732,000 discouraged workers that believe there is no work available for them. Therefore they have stopped looking for work.

The ECB should be kicking off their stimulus on March 9th to run through September of 2016. The ECB should be buying about 60 billion euros in government bonds per month for their stimulus package. What is interesting may be that ECB President referenced flexibility in the plans which is similar to the US Feds mandate. They left their main refinancing rate at 0.05% unchanged. The ECB has lifted their growth forecast from 1.0% to 1.5%. The ECB had increased the amount of Emergency Lending Assistance (ELA) for the Greek banks. Greece was fortunate to secure a four-month extension on its bailout and about a billion euros in funding for reconstruction and development from the ECB! The very pledges that got the Greek leader nominated to office must now be chopped. An end to privatizations, raising the minimum wage and welfare spending may all forego significant changes. He also made some concessions in the way of humanitarian crisis such as free food and electricity to the many impoverished Greeks as his first legislative act. If Greece must print more money, they may have to exit the Euro Zone yet.

The Russian Security Council has claimed that the US is conspiring against Russian President Putin after the murder of Boris Nemtsov. There is no proof that the killing was initiated by the current administration supporters. Islamist extremists could also be responsible. No one is certain. It is thought that he may have had information regarding the involvement of Russian troops in the Ukraine conflict while Putin denies it. The Ukraine and Russian race to ruins seem to be not only engulfed the physical combat but the financial depravation of both currency and economic growth. Moody’s Investors Service downgraded Russia to Ba1. The other two credit rating agencies have already downgraded the country to junk. The economic sanctions inflicted by the US and EU have taken their toll as the country languishes near recessionary levels. The Ukraine had to halt trading on the Hryvnia to cease the fall and stabilize the currency. The National Bank of Ukraine raised the refinancing rate to 30% from 19.5% to attempt to stabilize the currency and lending. While the Ukraine is attaining support from western allies, the loans may come due in an economic environment too weak to sustain itself over time. For the first time, Chinese leader Qu Xing, ambassador to Belgium cautioned that western intervention in the Ukraine conflict only accelerated the crisis. Foreign policy and diplomatic relations is vital for the retained balance and stabilization of the ailing countries. 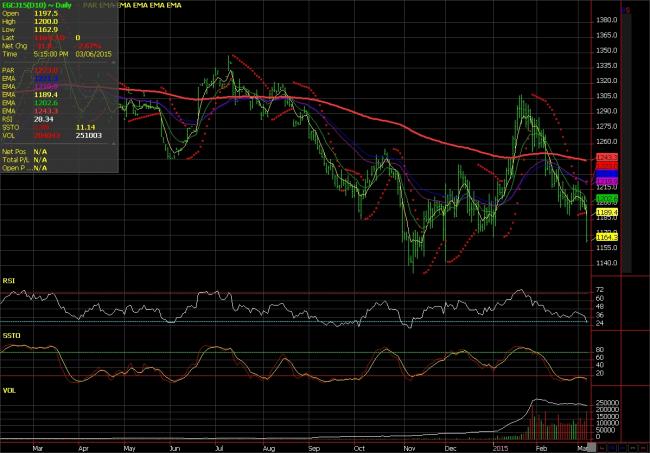 The safe-haven properties of the Gold are perfect for those times of uncertainty and/or conflict in the world! The Gold (April) contract is in a sell mode if it stays below $1223.00. A key consolidation area may be $1132.10 to $1223.00 for the moment. $1178.80 may be the comfort level. The range may be $1132.10 to $1223.00 for now. The main catalyst that may support the Gold would be Greece exiting the Euro Zone and possibly the stimulus to begin Monday from the Euro Zone.

The options may give a trader the right to control a futures position at a specific price or to simply profit/loss on the premium itself. It is suggested to consult your broker without delving into options if you are unfamiliar with them.