This originally appeared as a blog post in Scott Hoffman’s Futures Insight Blog on Tuesday, July 08, 2014.

Of the three days in the Taylor Trading Technique cycle, I often don’t look to trade markets that are on the Sell day, as Sell days don’t have the clear directional bias of a Buy or a Sell Short day. However, there are some setups that can yield good trades on Sell days.

There was such a trade today in the crude oil futures. On a TTT Sell day we often look for a market to rally back up to a previous day high so if a Buy closes well below its session high, we can look for a decent sized rally in the following (Sell day) session. 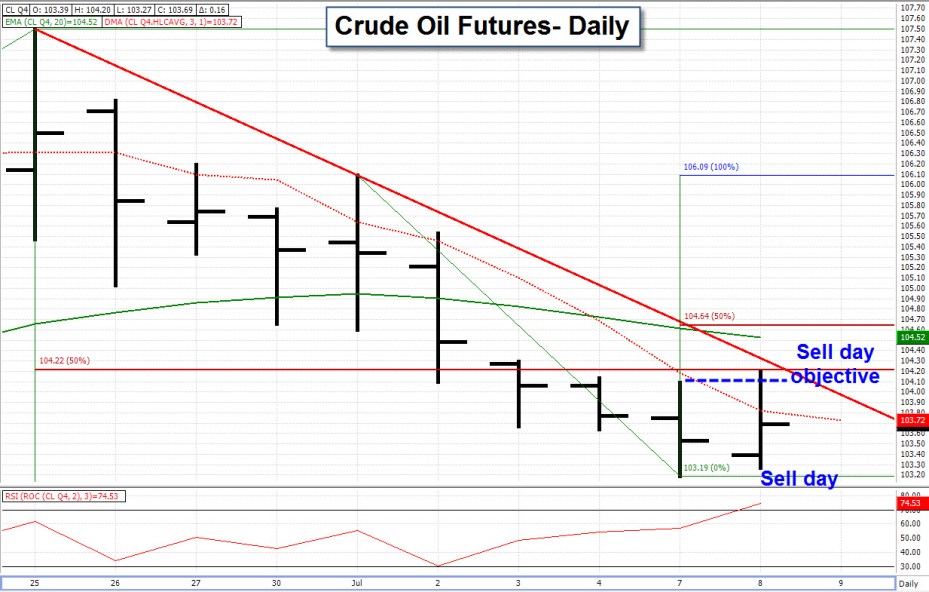 Crude traded weak overnight, spending most of the session slightly below the unchanged level. It began to rally as we moved toward the US open and I pointed out the buying opportunity in the morning STI watch list.

Around 8 AM CT crude rallied above Monday’s close, triggering the long entry I suggested around 103.53. The initial stop loss could go either below the previous overnight low of 103.31 or the session low of 103.21. 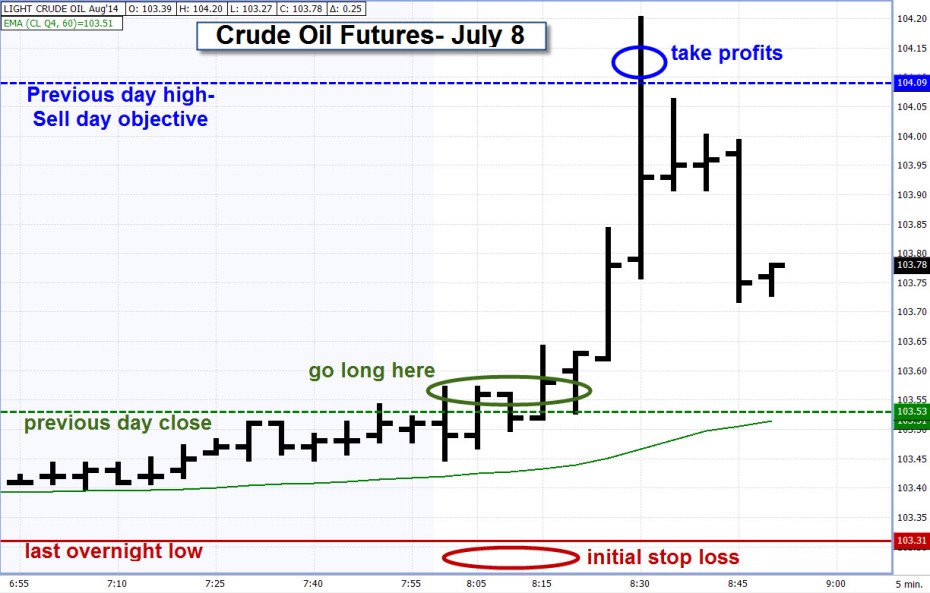 Moving above unchanged accelerated the rally, and it reached our objective of Monday’s high (104.09) around 8:30 AM. I would be content with this profit as the daily trend is down and the market couldn’t maintain itself above Monday’s high.

Scott graduated from the University of Chicago in 1986 with a degree in Economics. After graduation, Scott worked on the floor of the Chicago Mercantile Exchange then moved upstairs, serving as the personal broker to a former chairman of the Chicago Board of Trade. There, he worked as a broker and margin manager, starting up the firm’s full service brokerage division.

Today, Scott serves as an educator and mentor for new traders, and as a trading partner and ally for experienced traders. The breadth and depth of Scott’s knowledge make him the “go to guy” for both retail and institutional traders.

Scott also publishes two futures advisories, Swing Trader’s Insight and Trade or Fade. He also writes the futures trading blog at www.futuresinsightblog.com. Scott has written articles for a number of futures publications and has done numerous futures trading seminars, including seminars for both the CBOT and CME.

Scott offers his customers the knowledge he has gained from his more than 25 years of experience in the futures business. Scott is accepting new clients at this time.

Scott lives in suburban Chicago with his wife and three children. In his free time he enjoys coaching his children’s sports and various other athletic activities.