This is a sample entry from Leslie Burton’s newsletter, The Weekly Gold Digger, published on Friday, March 14, 2014.

The potential conflict in the Ukraine and the slowdown in China may be the perfect storm for Gold. The possible deflation fears in the Euro Zone may add to the fear factor. Holdings in the large Gold SPDR Trust increased to 813.3 metric tons yesterday (March 13). For the week ending March 4th, the net-long Gold futures and options expanded to 118,241 positions. The US Mint sold about 4,000 ounces of the Gold Eagle Coins last week. The demand for Gold in China to-date is believed to be around 418 tons. Anticipated demand going into 2015 is about 550 metric tons. The safe-haven aspects of Gold may just appeal more than many paper assets with the fear factor out there. China typically likes to buy Gold at lower levels, but should the fear factor increase, the allocations should find Gold more appealing.

Sunday is vote in the Ukraine on the referendum where it will be decided if Crimea region would be annexed to Russia. Russia had actually given Crimea to the Ukraine in 1954. Russia has been going through military exercises near the border of the Ukraine showing its stance to have the right to protect its citizens residing in the Black Sea region. The conflict has heated up in the eastern Ukraine. G-7 leaders may act on any referendum to annex Crimean Peninsula. While showing the opposition to Russia, the world leaders still hope Russia to remain cooperative in the Iran talks regarding nuclear policies. The market is nervous about any potential “cold war” with Russia concerning the Ukraine.

Uncertainty is what pauses this market. The uncertainty comes from two sources: the potential Russian conflict over Crimea, and the data possibly coming out of China. These two areas are strong enough fear factors to move the market, even with the US in a solid recovery. Russian President Vladimir Putin had petitioned his troops that were on the Ukraine border confirming that his intensions were not to invade Crimea. He sent 19,000 military to the Crimea region. The small Black Sea region of Crimea is quite valuable in terms of resources. The Ukraine has been in political turmoil, leaving itself open and vulnerable to other countries. The Ukraine Interior Minister Arsen Avakov discussed how the country may be prepared to send 20,000 of its militia to the borders for protection. The US had offered loans to the Ukraine, totaling about $1 billion via financial institutions to aid with the struggling economy. Viktor Yanukovych had been an ally to Putin, and after becoming cast out from the Ukraine as President, may have solicited aid from Putin. The US had put together sanctions to penalize Russia for any overtures, and the Ukraine is struggling to hold Crimea. Crimea is vital as an access route through the Black Sea Ports. Now Crimea parliament votes whether to join Russia.

US President Barack Obama has warned Russia along with the G-7 about potential sanctions that may be imposed. To further the point, the President has released holdings of reserve crude stock oil supplies from the US Strategic Petroleum Reserve. This brought down the price of Crude Oil which could potentially hurt Russia as a producer. OPEC then came back with a vow to reduce production by 1.1 million barrels a day. Russian President Vladimir Putin has defended his rights to infiltrate Ukraine borders to protect Russian citizens. The European Union has condemned any action in Crimea as illegal. The March 16th referendum may be considered to violate international law. The uncertainty resulting in the Russian Presidents intentions for Crimea weigh on the market and any potential conflict with Russia would change history forever. The G-8 said that they will suspend the G-8 Summit in Sochi this year. The Organization for Economic Cooperation and Development has spoken of revoking Russia’s entrance into the organization. Asset blockades, financial and trade sanctions have all been suggested. Russian President Putin defends his right to send troops to the Ukraine on behalf of the Russian citizens residing there.

China’s industrial output was at an 8.6% rate, retail sales data came in weaker at 11.8%. Their initial growth target as of last week was 7.5%, but today (March 14) that had to come down to 7.3%. Copper typically is seen as a leading indicator for China’s growth which consumes about 45% of the global demand. The Copper has been in a severe downtrend. As a world leader, China is front and center when it comes to global recovery and how it is perceived. China’s exports have dropped 18.1% in February. The Shanghai Composite Index has decreased by 2.9%. China had also succumbed to a bond default as Shanghai Chaori Solar Energy Science and Technology Co. had missed an interest payment.

The US wants to uphold its voting rights with the International Monetary Fund (IMF) where they may hold more weight with global issues. The voting rights give more power to control through the vote, but the US still owe from a 2010 commitment, which US President Obama wishes to settle. The European Central Bank kept their interest rates unchanged at 0.25% possibly due to stronger inflation and increased productivity. The European Union has promised $1.6 billion euros to the Ukraine in emergency aid. The euro has strengthened on ECB President Draghi’s optimism regarding the Euro Zone activity. He regards the deflation risks as easing for the moment. Their recovery is regarded as moderate. The next US policy meeting takes place March 18th and 19th. Yellen is known as one of the architects of the quantitative easing program that was instituted by the previous Chairman Ben Bernanke. If the Ukraine situation should heat up and/or the Chinese data show weakness, we may look for some profit-taking next week. In February, 175,000 new jobs were created, giving a boost to the marketplace as analysts were expecting 150,000. The recovery looks to be on track even with the inclement weather conditions sustained over the last few months. The data had been mixed, leaving traders to ponder whether this was true weakness or a temporary weather driven theme. A potential retracement target long-term may be $1794.50. If $1825.50 is not penetrated, the market may return back at the highs. The two factors weighing on the market are the sluggish Chinese data and the potential conflict in the Ukraine.

The Gold (April) contract is in buy mode if it stays above $1329.40. It could retrace to $1290.00 or back up to $1550.00 depending on the Ukraine situation and the Chinese economy. Anything can happen. The options may give a trader the right to control a futures position at a specific price or to simply profit/loss on the premium itself. It is suggested to consult your broker without delving into options if you are unfamiliar with them. 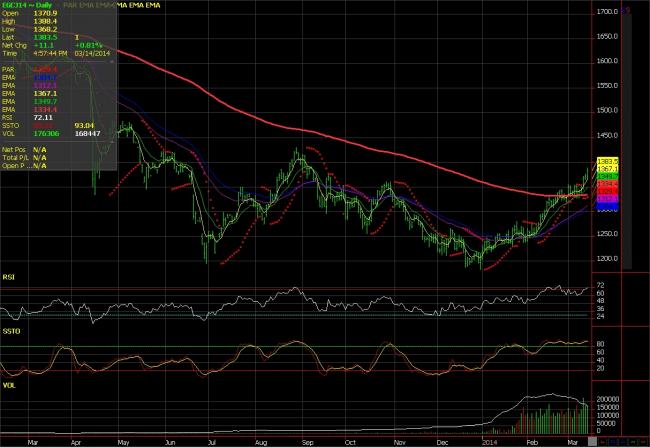 Download your FREE copy of “Gold Exposed” and learn the ins and outs of the gold markets that will help answer many of your trading questions.