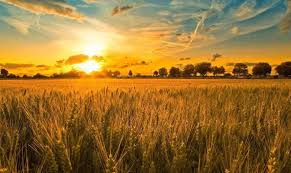 If it had not been for Wheat, human beings may never have socially and culturally developed as cosmopolitan as we have. Wheat was the first crop to be cultivated on a grand scale and stored long-term, enabling the start of city-based societies and the dawning of civilization.

Wheat is a cereal grass, but before cultivation it was a wild grass. Wheat is believed to have originated in southwestern Asia. Archeological research indicates that Wheat was grown as a crop in the Nile Valley about 5,000 BC. Wheat is not native to the U.S. and was first grown here in 1602 near the Massachusetts coast.

When Wheat is traded at the commodity exchanges it must be classified into very specific classes according to grain properties. The Kansas City Wheat contract, also known as Hard Red Winter Wheat, grows during the US winter months. Hard Red Winter Wheat is the most abundant crop in the US, growing in Nebraska, Kansas, Oklahoma and the Texas panhandle. These regions are ideal for planting due to the cold, subzero winters and general lack of precipitation. The planting season is from mid-August through the end of October. The crop heads in May and the harvest occurs at the end of May through August. Hard Red Winter Wheat’s primary use is in bread making.

Kansas City Wheat futures provide a way to effectively manage the global price risk that Wheat merchandisers, producers, food processors, livestock operations, importers and others have related to the purchase or sale of Wheat. Futures contracts provide opportunities to identify short and long-term cyclical price and volatility patterns. Kansas City Wheat futures traders are able to take advantage of arbitrage and spread opportunities with other commodities, including related grains, oilseeds and livestock.

The Daily Price limit is currently $.35 per bushel expandable to $.55 when the market closes at limit bid or limit offer. For example, if the market closes at limit offer, or 674’4, on March 5, 2014, the next session’s Daily Price Limit would increase to $.55. If the following trading session fails to close at limit offer, the next session’s Daily Price Limit reverts to the $.35 limit. The exchange resets daily limits for Wheat in May and November of each year, based on a percentage of the average settlement price of benchmark contracts during a roughly nine-week observation period.

The futures contract’s Last Trading Day (LTD) is the business day prior to the 15th calendar day of the contract month. The May 2014 Kansas City Wheat futures contract LTD is May 14, 2014 for example. The First Notice Day (FND) for that same contract is April 30, 2014.

This particular market has the potential for volatile and large trading ranges due to fundamental factors.