This is a sample entry from John Payne’s newsletter, This Week in Grain.

As a reader of TWIG, I hope you have come to understand my major objective to inspire ideas so you can hedge or trade these grains markets on your terms. Lately, I have been asked by producers why it would make sense to re-own. Today, I am going to step out of my bear costume and put on my bulls jersey. Maybe I can inspire an idea or two to get you involved.

There are two charts that make me nervous being a bear. The first is the COT data. As you can see below, the funds are now short corn. They have not been this short corn at any point over the past 7 years. I know there is no story right now, but let’s see if we can find one.

The chart above shows us the potential that exists in the corn market, should there be a story. Any time I look for a bullish commodity story, I am going to one place…China.

Below is a chart of the China’s corn imports and then the expected Chinese consumption vs production numbers. Past performance is not indicative of future results, but with that said, each of those years in 1997,2000,2001,2002,2003 and 2004 all saw significant rallies (double digit percentage) throughout that year’s growing season, most coming from post planting. So while I remain bearish of the crop coming out of the ground right now, I would not be getting too oversold on 2014 corn and try to see some validity in wanting to re-own some sold production for this year. All we need is a story. 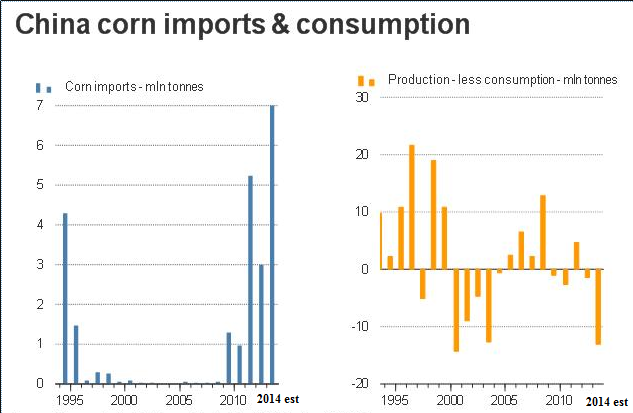 The short term picture is not rosy at all, but based off of the two charts above, the potential for a short covering rally exists. Remember, trading is about predicting where the market is headed, not where it is. The bearish data that we all hear and follow is being priced in. And while we do not believe there is to be a substantial rally in the cards soon, the potential definitely exists for a rally sometime after the US corn gets planted. If I were looking to re-own, I would get away from the front month and use the May or July contracts.