The latest round of economic news and reports out of the United States, Europe and China has all been bearish for the markets. The European Monetary Union (EMU) has been the bear market leader as money flees the continent. Spain’s banking system is front and center as the market believes Spanish banks need massive bailouts soon. Many analysts are starting to worry the situation could rival what happened to the markets when Lehman failed in 2008.

While the problems in Europe dominate the macro markets, China and the United States are not helping matters either. The Chinese PMI fell from 53.3 in April to 50.4 in May, which signals a significant slowdown in Asia. This means the Chinese economy is slowing down. The US was not better on Friday as unemployment rose to 8.2%, due to a worse than expected as May payrolls only climbed by 69,000 jobs last month. This was way below expectations.

Most of the economic data now shows the better part of Europe in recession. The most recent US data suggests America is at risk of entering a recession in late 2012 or 2013 if growth continues to slow. China is not in a recession at all, but its economy is slowing. Again, China is growing but at a slower pace than before.

Now, before we all start to think we are only in the middle of another Great Depression, let’s remember that during the Great Depression GDP fell 26.7% from 1929 to 1933, and 18.2% from 1937 to 1938. The last recession of 2008/2009 GDP fell only 5.1%. If the United States falls into a second recession later this year or in 2013 (and that is a big IF), it should not be as bad as the last one (just like how the 1929-1933 period of the Great Depression was worse than the 1937/1938 period). I personally think that the United States has already passed through the worst of the Great Recession but there is a realistic chance we still have a smaller recession to go through at the end of this year and into 2013. The recession of 2008/2009 was due to US financial crisis and it hit America hard. If we have another recession it will most likely be a result of the European financial crisis. If that recession does materialize, I should be much harder for Europe than the United States.

The good news is that things really should look better next year. The housing market may actually stabilize in 2013. The United States needs about 1.5 million homes a year to satisfy population growth due to increase in births and immigration. The inventory for sale has been well over 1.5 million since the housing bubble popped. In 2013 existing inventory should be around 1.5 million. This does not mean the housing market will start improving. It does mean the bearish pressure that we have seen since the real estate bubble burst will finally be lifted.

I also like 2013 because there is real possibility of US Government debt reduction, entitlement reform, energy legislation for natural gas, and if we do have a small recession we will see the possibility of real economic growth afterward. The second half of 2012 looks to be challenging with Europe leading the bear market lower, but I really do think there are a lot of positive things that can start to happen in 2013.

The old adage “Sell in May and go away” would have worked perfectly this year. The S&P 500 is down about 100 points in the past month. Below is a daily chart that goes back about 18 months. The 1100 lows of last year are from the “Flash Crash”. If Europe implodes the Flash Crash lows would be my target for the downside. If Europe can have an orderly exit, then the decline should not be as severe.

The markets will likely head lower until we get some kind of resolution in Europe. Earnings estimates are starting to head lower for Q3 than they were in Q2. The US economy is showing slowed growth and a recession is possible. China is slowing and then there is Europe, of course.

Markets don’t go down in a straight line so timing is everything when trading. I do like selling the rallies and covering at key support levels. Right now the market is down big. I’ll wait to short, but I do like selling any significant rallies in the stock market right now. 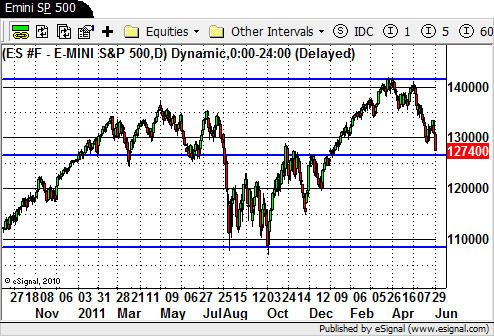 Gold has rallied about $100/oz in a three day period (from low on Wednesday to the high on Friday). The economic news has been so bad out of Europe, China and the United States that the market thinks the Fed will be forced to unveil QE3 in the coming weeks. The expectations of another round of US Fed sponsored Quantitative Easing is what sent gold up so much at the end of last week.

If we get QE3 that means the Federal Reserve will be creating more liquidity, which is another way of saying printing more money. This causes the value of the dollar to go down and gold to increase.

Gold is one of my favorite markets to play based on trading ranges right now. Getting long at support and selling at resistance has worked very well lately. I have two charts below for Gold. The Daily Chart shows Gold building a base around 1550. The Monthly Chart still looks long term bullish. We had similar price action in 2008 as we do in 2012. The biggest difference is that Gold traded between $800 and $1000 an ounce for most of 2008. Over the past year Gold has been trading between $1550 and $1950.

If we make another run at $1550, I really like buying Gold. It has proven to be very good support. Gold should see some resistance around $1640/$1645. Selling this overbought rally and trying to make $10 to $20 on the downside cold be a nice day or swing trade. 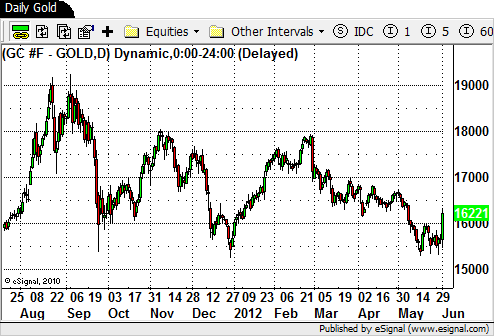 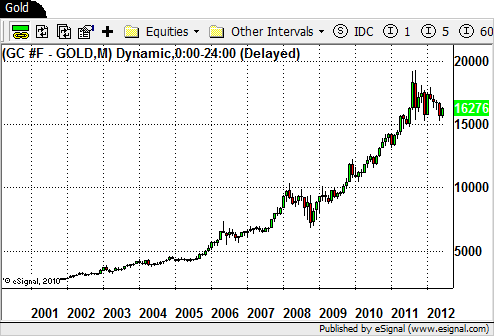 July Heating Oil tends to perform better against July RBOB Gasoline in the month of June. Gasoline suppliers have already built up supply for RBOB due to the expected demand the summer driving season brings. Heating Oil suppliers will start building stocks now through the summer in order to prepare for the Fall and Winter demand season.

Traders who are looking for an attractive risk/reward scenario should take a look at this trade setup. We are near the bottom of the recent trading range for this spread, with RBOB trading 200 over HO. In the past two months HO has traded over RBOB by 1000 ticks. That is a $5000 move. I think you want to risk to at least 500 RBOB over HO, which would be 300 pts lower from here, or about $1300.

This trade is not for the faint of heart. Heating Oil vs. RBOB Gasoline can be as volatile as they come, just like Crude vs. Natural Gas or Gold vs. Silver. Still, for traders who are comfortable with these markets, it is a very interesting play. For those interested in this trade, the Margin is $2800 per spread. I would look to get in around -200 and risk to -500 ($1260 risk). If we can get to +800 the gain would be around $4200. 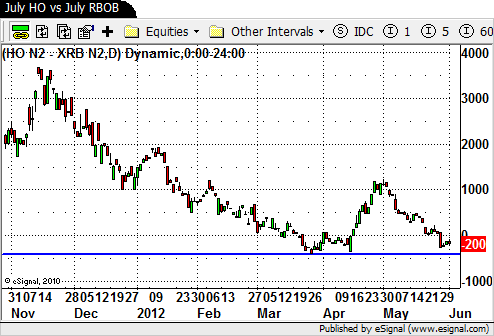