This post originally appeared in FutureSource’s Fast Break Newsletter on June 23, 2010, where Craig Turner is a regular contributor on various futures trading topics.

Why We Trade Futures Spreads

When it comes to Futures Spreads, many traders ask us what is the benefit of spreading futures contracts. They want to know why we often choose to spread futures contracts instead of either being long or short a single futures contract or option, or use option spreads instead. In our experience, futures spreads, also known as pairs trading, offers the leverage of futures contracts, helps hedge systemic risk, eliminates stops, and we get this reduced risk without having to pay up for time premium as options traders do. When you factor in opportunity available, risk management, cost effectiveness and margin efficiency, Futures Spread Trading can be a far superior strategy over flat priced futures trading, options and option spreads.

Guide to Futures and Spread Trading

Futures Spread Trading is a strategy of simultaneously buying a particular contract and selling a related contract against it. This strategy is also called pairs trading. In pairs trading, one market within a sector is bought and a separate market in the same sector is simultaneously sold short. This provides an investor with exposure to the relative performance of the two commodities with limited exposure to broader market and sector performance.

For example, let’s say you think the US is in the midst of a very strong and robust recovery and growth period (I know – it is very wishful thinking). If that is true, then small cap equities will outperform large cap equities. Smaller companies can grow much faster than larger ones in percentage terms. A futures spread trader would see this as an opportunity to buy the Mini Russell 2000 and sell the Emini S&P 500. The Russell 2000 is a small cap index and the S&P 500 is a large cap index. In times of economic recovery and growth, small caps should outperform large caps. In times of economic recession large caps should outperform small caps.

Trading spreads limits the exposure to systemic risk. In other words, it minimizes the risk associated with outside factors that can affect commodity prices.

Let’s take an example. Dec Corn is trading higher at $4.00 while July Corn is around $3.50. After studying the fundamentals and/or charts, you feel Dec Corn should drop 25 to 50 cents while July Corn will remain unchanged.

You short Dec Corn. The next day the Fed announces it is bailing out Europe. Money floods the US and International financial system. The US Dollar Index plummets, and over the next month the USD decline sends Dec Corn higher to $5.00, July Corn higher to $4.50.

If you had been short Dec Corn and long July Corn the spread would still be around 50 cents and you have time for Dec Corn/July Corn to narrow, which it certainly may do. If you were only short December Corn you lost $1.

You may have been fundamentally correct, that Dec Corn was overvalued and should be sold. But since you did not long the July Corn, you lost money even though you were correct about the market fundamentals. The change in the value of the US Dollar turned the trade into a loser.

We use pairs to eliminate as much systemic risk as possible. We want our trading to be about the relative value of two commodities or crops within the same market. We want to minimize the effect of outside market forces as much as possible.

How Spreads Make (and lose) Money

The only times when the contracts tend to move up and down at the same time, is during market panics and major sell offs. In those situations investors and traders tend to “shoot first, interrogate second,” as the good gets sold with the bad. During the sell off it is most likely the nearby and deferred are being sold equally.

The second type of spread is an Inter-Commodity Spread. This is a spread between two different markets, like Corn Vs Wheat or Heating Oil vs. RBOB Gasoline. Let’s say we think farmers are going to plant more Corn than Wheat. That would be bearish for Corn prices and bullish for Wheat prices. We would short Corn and get long Wheat. It doesn’t matter if Corn and Wheat go up or down in value. All that matters is that Wheat holds up better than Corn. If the markets rally, we want to see Wheat gain more than Corn. If the markets decline, we want to see Corn go down more than Wheat.

We trade futures spreads to hedge against systemic risk. You never know when the next shock to the system or market crash will happen. We’ve learned through out the years to never expose ourselves to more risk than necessary.

When a trader in long one contract and short another, they are hedging out the USD. The USD represents the entire US economy. If we can hedge this out of our positions, we do so immediately. Let’s say we are long the Crude Oil (CL). That means we are long CL but we had to put up cash margin to get that position. The CL contract is priced in USD. In that case, we are not just long the CL, we are also short the USD. If we used USD to get long CL, we have a long CL/short USD position, or a CL/USD cross. If Greece defaults on their bonds, sending the Euro into a tailspin, the USD will go up materially. The rising USD puts pressure on Crude Oil, sending CL down.

The only way to offset this risk is to spread Crude Oil against a deferred contract or another market. Let’s say July Crude is the front month. We are bullish Crude Oil and we buy July. To cancel out the USD we sell December Crude, creating a long July Crude, short Dec Crude spread.

If some catastrophic even happens on the other side of the world, causing the USD to rally and CL to decline, my spread should be intact. Whatever amount July Crude decreases, most likely Dec Crude will go down to. The outside event will have been properly hedged.

When you are long the Emini S&P 500, you are not just long the S&P index. You also have exposure to the USD and the US financial system as a whole. This is massive exposure to events and conditions that are impossible to predict or account for. When you spread a contract, you are hedging out the USD, or outside market forces, and just making the trade about two very specific markets. There will be fewer factors and therefore fewer unknowns by hedging out the USD. This is another reason why the margins are reduced.

The leverage traders are using in their accounts are also greatly reduced, which is a good thing. Most traders over leverage their accounts. Overleveraged accounts either lead to traders blowing out their accounts on a big market move against them or slowly bleeding the account to $0 because they use stops that are too close to the normal trading range.

Any market can be spread traded. Some markets like the grains, livestock, energies, softs and financials are more common than the indices, currencies and metals. All markets can have calendar spreads or inter-commodity spreads. However, all markets might not have a spread discount. Spreading Corn vs. Wheat gets a 60% reductions in margin because they are related markets. Spreading Coffee vs. Cocoa has no margin reduction because the fundamentals of the two markets have nothing in common. If the markets are related fundamentally, there is a good chance a spread credit exists. To find out if markets have spread credits just go to the Margin/Performance Bond section of the Exchange web site.

Traders follow these patterns and trade the seasonal channels. For example, this time of year the grain markets tend to go up faster in the old crop vs. the new crop. Traders will buy July corn and sell Dec Corn, or buy July Soybeans and sell Nov Soybeans. Any shortage in beans or concerns about the crops will cause the near months to rally faster than the deferred months. This seems to happen more often than not, which makes it a very popular spread trade. 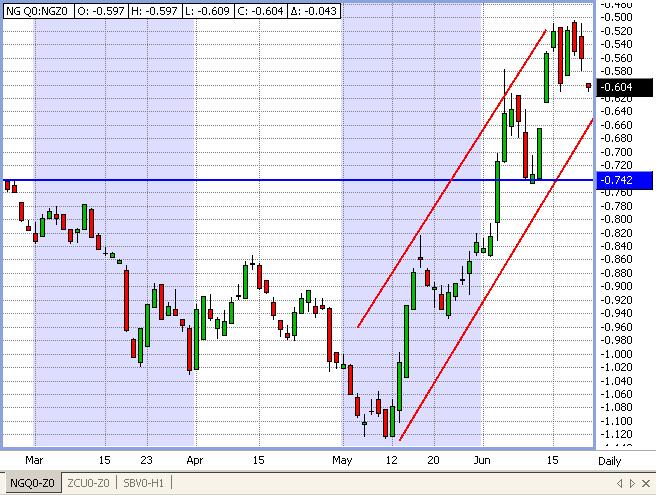 Corn looks to have bottomed and seasonally this is the time of year when Corn has its best chances for higher prices. Corn prices can be volatile this time of year, especially due to changes in weather and USDA reports. Traders looking to take a bullish position in Corn but cut down on the volatility can buy September Corn and sell December Corn, which is a Futures Bull Spread. 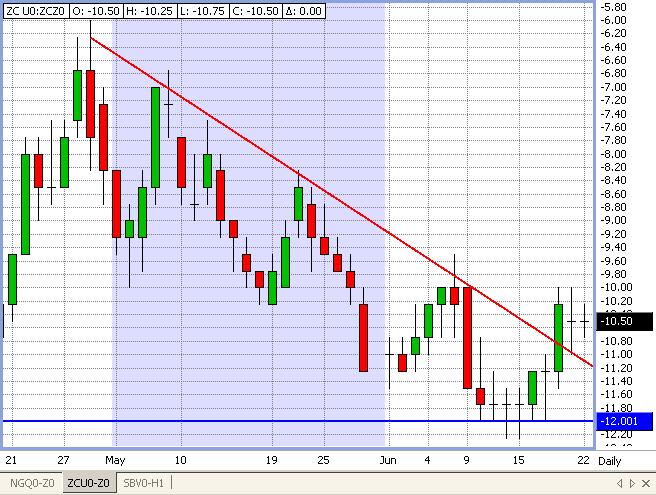 Sugar made historic highs earlier this year. Now that the new crop of Sugar is coming in, many analysts feel Sugar will be heading back down to 12 or 13 cents a pound. There will be price spikes in Sugar as commercial users still need to buy Sugar until the new crop is delivered to the market. To cut down on the volatility, traders can sell October 2010 Sugar and Buy March 2011 Sugar, which is a Bear Futures Spread.